As the war in Yemen continues and there seems no end at sight, bringing peace to Yemen is increasingly becoming a mission impossible. Three months on the start of the Saudi-led airstrikes campaign in Yemen that intended to dislodge the Houthis and bring back legitimacy to president Hadi, the warring parties have been both reluctant to admit that they are not winning the war, and reluctant to rethink proceeding the war given the tragic humanitarian situation people in Yemen are enduring. The failing of the Geneva's peace talk, or whatever it was described with, proved that peace in Yemen is far from happening anytime soon.

Nonetheless, grassroots groups and civic agents' advocacy and pressure work is crucial in influencing relevant organisations to act in a more informed way which could assist the advancement of peace-making process. That's why I'm glad to be taking part in a side-event at the Human Rights Council in Geneva during its 29th Session. I'm thankful for the Gulf Centre for Human Rights for extending me the invitation. 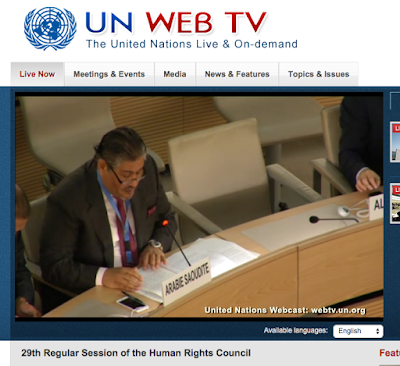 As I'm sitting at the UN's office in Geneva, at the council's main hall now, and writing this post, and surrounded by more than 46 nations' representatives speaking about various stressing aspects of human rights in different countries, I remembered the speech given by Yemen's human rights minister, Ezzaldin al Asbahi a couple of days ago.

Even though Yemen's HR minister's speech at #HRC29 2dy wz moving, it was unbalanced; given his governmental stance http://t.co/tt72Ptvw5y
— Afrah Nasser (@Afrahnasser) June 18, 2015

He delivered his talk here and all these nations listened to his partial speech. The minister talk focused only on the atrocities committed by the Houthis/Saleh's forces especially at the south part of Yemen. He neglected, or rather overlooked the atrocities committed by the Saudi-led airstrikes and even how some nations closed doors on the face of Yemenis who want to escape the violence and survive. How can we ask the world to act more for Yemen, while it's this ill-informed about the reality for millions of Yemenis affected by all sides of the fight in Yemen.

Later on, I'll be speaking at the side event, with the hope to influence relevant international actors to act more and hopefully be more well-informed. I'll keep you posted with how it goes... may all this advocacy work help in advancing the peace we all are desperate to have.