Who are Ansar al-Sharia? 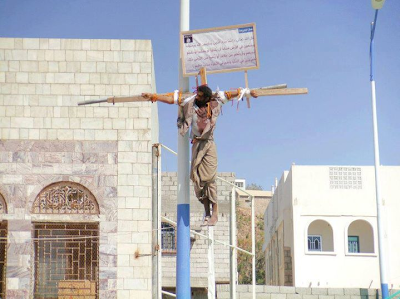 (Extract from Jeremy Scahill interview with DemocracyNow). A group calling itself Ansar al-Sharia had taken over a number of towns, including Zinjibar. And when I started interviewing people who were very well connected to the security apparatus in Yemen, they said Ali Abdullah Saleh let them to take it over, as a sort of last message to the United States, that if you let me go, I am going to show you what will happen, and what will happen is that al-Qaeda is going to take over. And so, all of a sudden you see Ansar al-Sharia, you know, the supporters or partisans of Sharia law, taking over these cities and creating their own Sharia councils, doing very brutal acts against suspected criminals, chopping off limbs.

Just a few days ago, there were three public executions (one shown in the photo above) of people that were convicted in the Ansar al-Sharia’s court system of providing intelligence to the Americans to be used in drone attacks, including one person who was executed in the very place where Anwar al-Awlaki’s 16-year-old son, who was a U.S. citizen, was killed in a U.S. drone strike. And they executed this man, alleging that he had provided intelligence to the Americans that had contributed to the death of Abdulrahman al-Awlaki, the 16-year-old son of Anwar al-Awlaki.

*And the relationship between Ansar and AQAP, al-Qaeda in the Arabian Peninsula?

Well, the first mentions of Ansar al-Sharia came from one of the leading clerics of al-Qaeda in the Arabian Peninsula a couple of months before Zinjibar was seized. Zinjibar was—the city was taken by Ansar al-Sharia in May of 2011. And this leading AQAP cleric said, "Ansar al-Sharia is the name we use to introduce ourselves, you know, to communities when we’re trying to promote our political message." So, essentially what he was saying is, "We’re trying to rebrand and not use the al-Qaeda brand, because it’s become so tarnished. And this is our new way of sort of presenting our mission without having to be bogged down by the baggage associated with calling ourselves al-Qaeda in the Arabian Peninsula."

Whether it’s a front group for al-Qaeda in the Arabian Peninsula, which senior government officials in Yemen and a lot of other analysts allege, yeah, it’s just a front group—whether that’s true or not has almost become irrelevant, because the ideas, the ideas advocated by Ansar al-Sharia, are actually taking root. And so, that’s why this is blowback, because you have a rising—you have multiple Salafist, very conservative sort of sects of Islam that are becoming increasingly popular in Yemen.

You have a lawless state. You have an implosion of the government. You have a political crisis where the only opportunity for people to vote is "do you want this man or not?" Once again, you follow a 33-year dictatorship by having a vote where only one person is on the ballot. And people are sort of saying, well, for now, it’s better to have law and order—and yeah, these guys are beheading thieves and all that stuff, but—or chopping off hands of thieves, beheading alleged spies, but hey, it’s better than no law and order.