Sana'a University's Campuses about to be Demilitarized After a Massive Demonstration

The momentum of Yemen's Uprising first days were revived today...

Dozens of Sana'a University students and activists had a nonviolent protest yesterday in Sana'a to demand demilitarization of Sana'a University's campuses, embodied by the first armed division's soldiers headed by Gen. Ali Muhsen's al-Ahmar.(Read more details from previous post) After being beaten up, aggressed and dispersed by gun shots, the protesters managed to undermine the armed political authority. Few hours after the massive demonstration, the first armed division news website announced that Sana'a University's president, Dr. Abdelkarim al-Sharjabi and Ali Muhsen have came to an agreement to clear the university of the soliders in the coming one week or so. 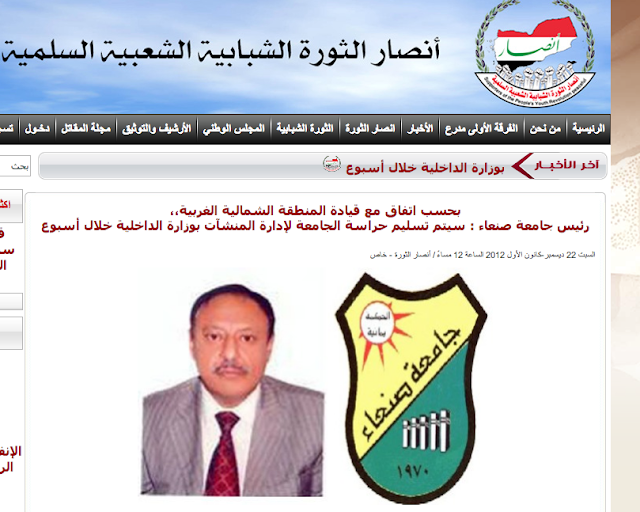 The state funded, Saba'a TV has also reported the same news of clearing the university's campuses within one week:


One of the leaders of the long-established campaign, "Ana Nazel" that worked in mobilizing people to take part in today's demonstration, Hani al-Gunid told me, "we spoke with the University's president, al-Sharjabi and he confirmed to us that he reached an agreement with the leadership of the first armed division to clear the University of soldiers in the coming one week, however, we just wait for implementing that for real."

The protesters are so close to realizing their demand which would be a remarkable achievement. However, I must tell about the sacrifice and violence they had to go through today for that sake.

"Around 11:45, we reached the cabinet and 10 minutes later when students fell on one of the metal fences and tried to get up and stand again, soldiers started pushing them back violently. Then some students began to chant: “Go away, go away” and this is when the soldiers held their riffles and started shooting on a very low level," blogs activist, Sarah Jamal; giving her count of the violent attack on the protesters today.

She adds, "The shootings continued for 15 minutes, they were heavy and random and as we were running, we only stopped a bit from time to time to collect the bullets from the ground. When they saw that they beat us with their metal sticks. I personally was hit with a metal stick in the leg and many others were hit in different body parts."

The following clip shows the violent crackdown on the protesters; males and females alike:


And this report shows in the first part when the soliders beaten up female protesters: 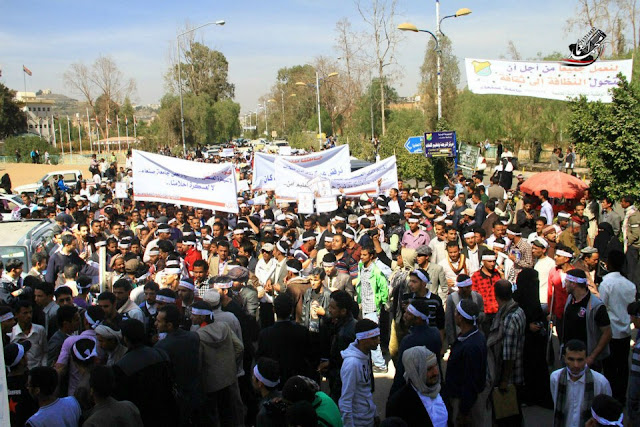 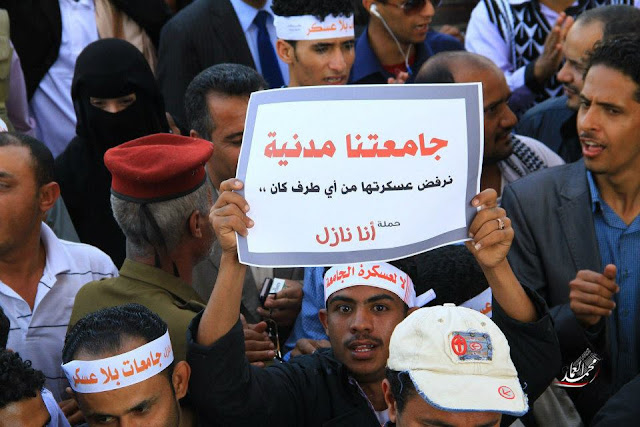 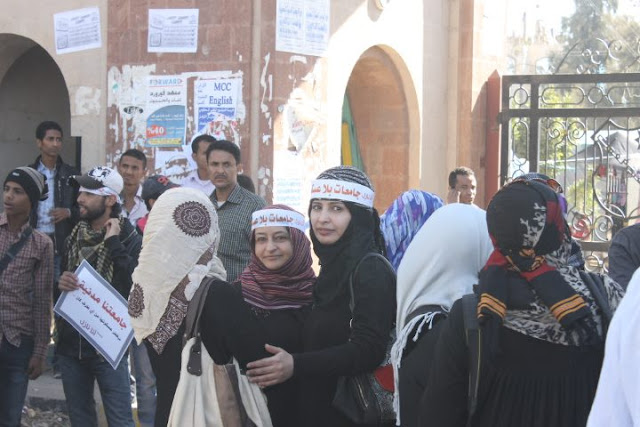 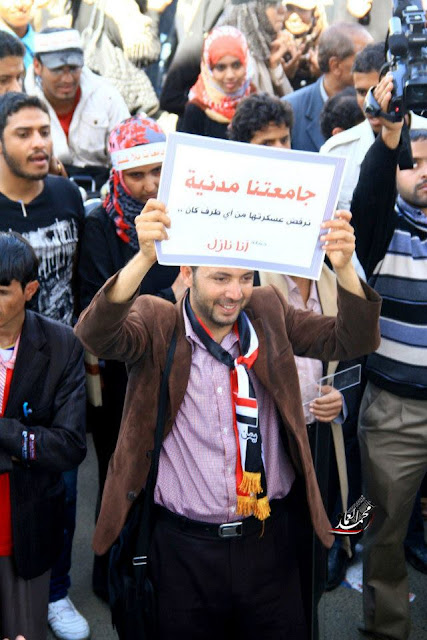 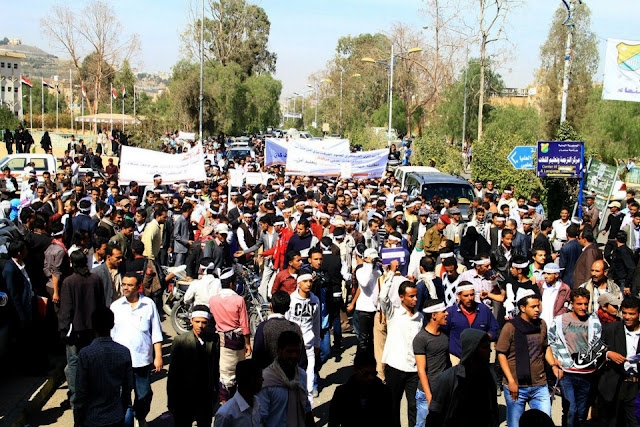 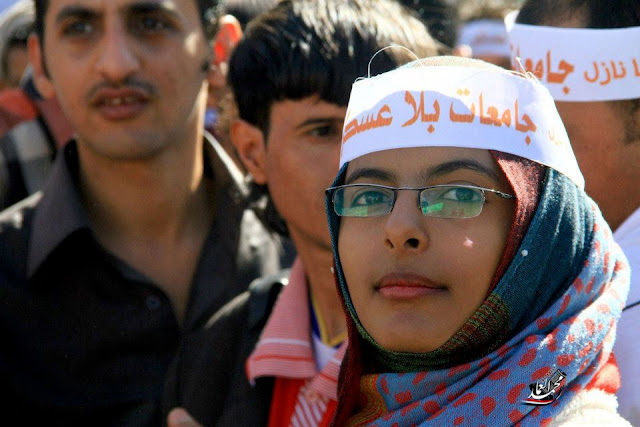 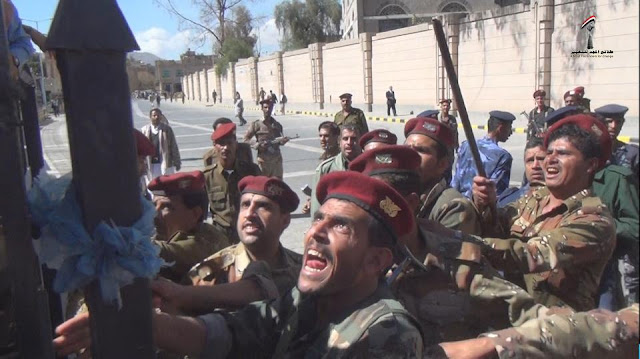 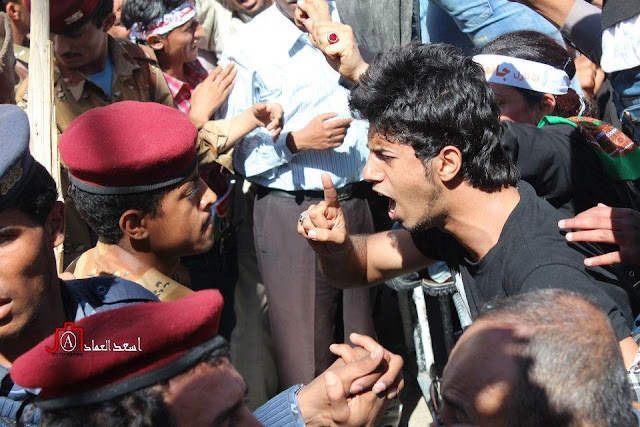 In essence, I reflect on today's demonstration and ponder on the following aspects:

1. I think today's demonstration was so remarkable to break down all sterotype perception of this heavily armed nation. The people were not demonstrating against Ali Muhsen's armed forces. No. They protested against the whole army system at universities' campuses. It was sort of a deep call to resist weaponry system and violence. Protesters were fighting an armed political authority with a collective peaceful social weapon, that's the act of protest, which is the most powerful weapon against oppression, injustice and tyranny.

2. I grew up in Sana'a city and I had my college education from Sana'a University. During that time, I was very accustomed of seeing weapons and armed men. It was part of the culture, but of course, it was heavily loaded with political reasons/agendas. When the uprising first started in Feb. 2011, the streets were extremely full with soldiers, arms, tanks, etc. It's clear the damage they have done against the protesters when more than 2500 people were killed and 8000 were injured in the course of the uprising 2011.

With that said, the fact that people were openly and strongly resisting the army presence, even though only from just the campuses, there has to be a profound shift that has happened to the people's minds. That's very outstanding shift. The psyche is no longer the same. There is an underlying transformation in the making, on the sociological level. I'm very positive this won't stop. Today there were calls to demilitarize the university, tomorrow there will be a call to demilitarize the whole city and so on..

I'm so proud of today's demonstration. I wish I was with them but at least I'm happy that I'm alive to live this day. I'm jus so proud of them!!

As long as the people of Yemen keep up the struggle, they will never lose.