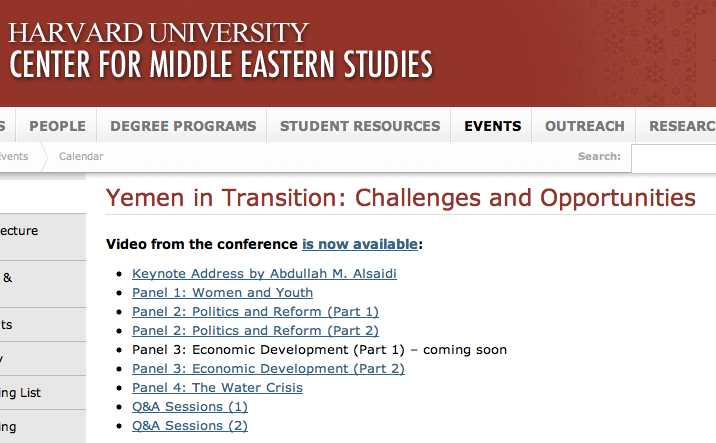 One of the most controversial conferences about Yemen ever held after Yemen's uprising 2011, 'Yemen in Transtion: Challenges & Opportunities' conference organized by/at Harvard University in October 19-21, 2012 provides very informative inputs on economic, political and gender issues related to Yemen, by a number of leading knowledgable speakers on Yemen's affairs who I'm acquainted to some of them, like, Ibrahim Mothana, Kamal Sharef, Jamila Raja, Haykal Bafana, Shatha al-Harazi, Atiaf al-Wazir, Dr. Elham Manea and Dr. Walid al-Saqqaf. So, why is it controversial?

The event was initially co-sponsered by one of the assistants (partner and deputy) of the resgined president Ali Saleh's nephew, Yahya Mohammed Saleh, Huda al-Sharifi. Al-Sharifi was co-sponsering the event, stated in the event announcement by Harvard University weeks before the event took place. Once that was online, Yemeni netizens reacted actively; condemning various aspects of the event like; how Harvard Uni. could collaborate with figures (Yahya Mohammed Saleh) who's directly associated to resigned president Saleh's tyrant regime? and other condemnations.. (Read More).

Few days later, Harvard University released a statement that said, Huda al-Sharifi's funds were given back to her and that the Uni. was no longer co-organizing the event with her. The press-release emphasized that Harvard Uni. is dedicated to free, unbiased and open scholarly inquiry.

Yemen's current ruling party headed resigned president Saleh has always been and is a close ally to the USA. To what extant this event was politically charged? it's hard to say. My overall take of this is, one; as it's clear, netizens' activism does matter, thankfully. Two, the panels provide very good information and analysis of Yemen's diverse affairs.

My favorite highlight during the conference is screening this short yet powerful video about 'US Policy in Yemen: A Recipe for Anti-Americanism?', done by SupportYemen.org:-

(The videos of the conference are forbidden to be embedded in other websites by Harvard viemo account) Please take a look at the videos at this link here.