"A university is not made to store katyusha rockets, nor to store tanks. It's rather made for education," says Hani al-Junid (in the following clip), one of the activists leading a strong campaign against the military presence at Sana'a University campuses, scheduled to take place next Saturday.

"Ana Nazel" campaign is an extension of a movement that has begun few months ago led by indepedndent activists against militarizing Sana'a University's campuses which have been occupied by the First Armored Division's Commander, the second most influential army commander after ex-president's son Ahmed Saleh, Gen. Ali Muhsen al-Ahmar's forces and Islah political party's loyalists.

Since the revolution erupted and armed groups came to the picture, specifically after the 18th March 2011 -the Friday of dignity's massacre-, Ali Muhsen's forces openly occupied the university's campuses allegedly to "support" the protesters, after he declared his support to the revolution.

Almost two years passed and the armed soliders never left the campuses. In fact, the area have been traumatizing the university's students and have caused a damage to what an academic place should be, nurturing education to minds rather than violence and weapons. Hence, the campaign calls for removal of all military signs from universities.

Here is some footages from inside one of the campus:

"Ana Nazel" has no political affliation, however, "The Socialist" facebook page (see here) have been promoting the campaign and mobilizing people to gather and protests together on 22nd Dec. 2012 in front of Sana'a University's gate. The page has disminated dozens of posters with people's pictures who support the movement; from Yemen and the dispora.

I supported them too.. my statement is; "Let us build a nation that respect and believe in education as a tool for growth, and no to militarizing the university." 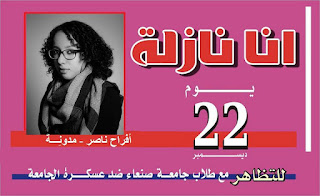 My take from this is ...  I ponder on that and, honestly, think; Gosh! in a country where nearly half of its population are under age 18, in a country where statistically has weapon pieces (60 million) more than its population (25 million), those university students of Sana'a Uni. represent the true meaning of nonviolent struggle against armed political authority that tries to eat them alive. Even though this sounds Utopian but history will tell when they, we, win and prove, eventually, how powerful is a nonviolent struggle.