The General People's Congress political party (GPC) -born in Aug. 24, 1982- headed by former Yemen's president, Ali Abdullah Saleh will hold a huge ceremony to celebrate its 30th anniversary, tomorrow, in Sana'a. In my opinion, it's going to be the 30th anniversary of corruption and looting of Yemen by Saleh's corrupt circle.

Nevertheless, the state media has been publicizing about the event for the past few weeks. "The GPC.. 30 years of democracy" was the title of a series of reports the state TV has been showing for the past several days. Like this one:-

It's very ironical! I really don't recall the GPC celebrating its 25th, 26th, or .. within the previous years. Definitely, this year is not like any previous year for many reasons, but the most important reason is that Saleh is no longer a president. Ha! Nonetheless, I bet Saleh will bore us with one of his speeches, tomorrow. After all, he's still the head of the GPC. 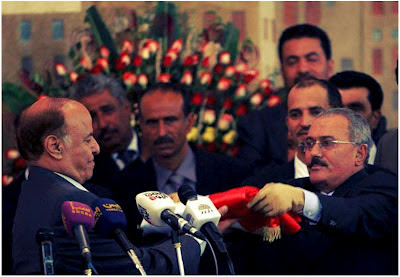 (February 2012- After months of protests, Saleh had resigned from the presidency and formally transfered power to Hadi, marking the end of his 33-year rule.)


Interestingly, reportedly, president Hadi (who's a member in GPC) won't attend the celebration ceremony, tomorrow. I guess the power struggle is already manifesting within the same political party.

In nutshell, Saleh is sending a strong message to all of his enemies with the coming ceremony that the GPC is stronger than ever and that he's still the man who occupies a great space in the political arena, no matter what. Plus, Hadi's refusal to attend hints that Saleh no longer fully controls Hadi.