Is There a Law to Prohibit Sexual Harassment in Yemen?

I was only 9 years old when I had my first experience with sexual harassment. That experience is not only still vivid in my memory, but also it was the beginning of my saga with being sexually harassed - just like millions of females in Yemen and around the world.

Of course, I never used the "alleged" law presented below; simply because the judicial system in Yemen is extremely corrupt. 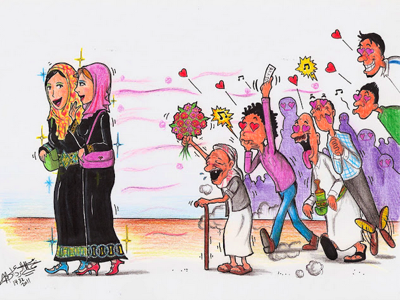 An illustration by Safe Street Campaign in Yemen

Women in Yemen are exposed to multifaceted kinds of violence, including sexual harassment that renders them unable to exercise their rights in both personal and professional environments.

Activists say there are certain loopholes in Yemen’s laws regarding punishments for crimes. Such loopholes contribute to the spread of the harassment phenomenon seen in the Yemeni community. A reported ninety percent of women are subject to different kinds of harassment, according to information released by the First Regional Arab Conference on harassment against women held in 1999 in Cairo.

“Yemeni law stipulates that anyone who commits an offending act in public is sentenced to no more than six months imprisonment, or he is to be fined,” Yahiya Al-Sakhi, a lawyer, said.

Al-Sakhi said that for anyone forcing a female to behave immorally, the punishment is no more than one year in prison, in addition to a fine. “If the woman consents to practice immorality, the two are sentenced to no more than six months in jail in addition to a worthless fine, 1,000 riyals.”

“We need to modernize the law in order to go along with the current time,” he said. “The last law amendment was in 1994. Thus, I think the fine should be raised to 100,000 riyals as an effective deterrent.” 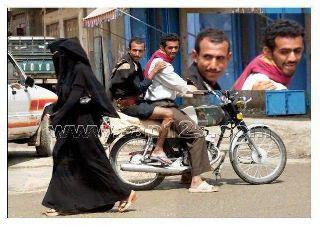 Abdulghani Al-Wajeeh, the Walking Police commander, spoke of the loopholes that hinder them from mitigating the spread of harassment.“One of the problems we face is the difficulty of capturing the culprit in front of witnesses,” Al-Wajeeh said. “This is an obstacle; a woman could be subject to harassment in some places unseen by others, which doubles the spread of this phenomenon.”

The long police procedures and the inadequacy of witnesses hinder authorities from implementing immediate punishment, and this could help the culprit escape the offence, Al-Wajeeh said.

He said it is essential to re-word the law to include strict procedures because the 1,000 riyals fine doesn’t deter anyone and the risk of six-month imprisonment isn’t taken seriously.

The security situation in the country, he said, makes it difficult to combat this phenomenon. He said family, schools, civil society organizations and mosques have to play a role in ending harassment instead of concentrating on politics.

Ghaida Al-Absi, a social activist, said there are 11,000 organizations, but the organizations that aim to tackle harassment against women are very few. “The organizations always work to please to the patrons, not to solve societal problems,” she said. “The problem is not limited to law; it is to its implementation as well.” Al-Absi said we need safe streets (read more) and the cooperation of all to curb sexual harassment offenses toward women. 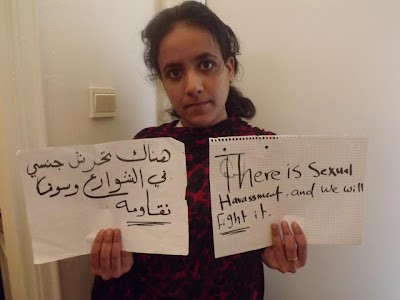