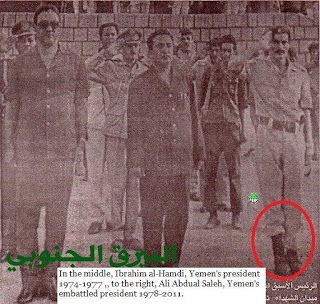 Let’s be realistic here. The political turmoil in Yemen seems not to be ending anytime soon. Yes, there is news of negotiations over the establishment of new transitional council but lots of doubts revolve around this council and lots of forces would perfectly work against the council concrete formation. Why? The doubts are because of the lack of credibility the council has and the forces – the regime and the opposition parties- would not support the civil modern state formation without taking in consideration many aspects.

Yemen’s political history since Yemen’s revolution on 26 of September 1962 has been led by the same figures in some way or another. Meaning, today, a number of the key names in Yemen’s politics landscape are probably the same since 1962. This makes me think; So, are we in a circle that never ends?!

Historically speaking, *Yemen started to see a real development in the reign of President Ibrahim al-Hamdi who was sworn in President of North Yemen after al-Eriani’s regime was overthrown. Al-Hamdi announced the 13 July Movement to correct the vulnerable situations in Yemen. He set his developmental policy by announcing five-year plans to cover all the Yemeni areas and worked hard to gain the confidence of that public that had been enduring hardships, conflict, corruption and chaos as different political and tribal forces were racing to rule the country.

Although Ibrahim al-Hamdi stayed in power for a short time, from 1974- 1977, after a series of conflicts- he could found the Cooperation Network that helped citizens implement their plans and developmental projects. Then, in 1977, al-Hamdi was assassinated. Consequently, the nation went through several political turmoils afterwards.

My point is, what’s happening in Yemen today is just another natural chapter in Yemen’s long troubled political history.

Here is a rare video of Ibrahim al-Hamdi where he says; “On 13 July 1974, the political situation was very deteriorating between two powers, the republican council and the Shura council. Both were not leading very well. I won’t hide it , that as a result of those problems , on 13 July we took over power without weapons power, we were just assigned by the legislative authority back then; presented by the shura council ; led by Sheikh Hussein al-Ahmer. I was offered presidency by all those who today are opposition. But I refused and I wanted to be elected by the people. Then I was stormed with criticism. But I’m not going to transfer the power to group of people; I will transfer it to elected powers by the people.”