Yemen is so utterly ruined, the Economist.com

Yemen's economy
Up the spout

How turmoil is ruining an already rocky economy

“IT’S shit, the situation in Yemen,” says a skinny man in a bakery in the old quarter of Sana’a, the capital. “Shit,” he says forcefully, as he walks out with a plastic bag of bread rolls, the price of which has soared by 50% in the past two months. Outside lorries trundle by, selling water at three times the usual price to the many households where the public water supply has failed. The occasional taxi sputters past, coasting downhill to save petrol and charging at least twice the usual rate due to fuel shortages. More firewood is being sold because cooking gas is now scarce. 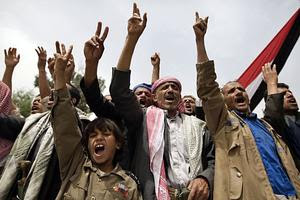 Neglected for decades by the government of President Ali Abdullah Saleh, Yemen’s economy was deteriorating before the unrest began five months ago. But as the protests inspired by the Arab spring have widened in scope and become more violent, they have helped to send the economy into freefall. The currency is collapsing. Famine is looming in the country’s rugged interior.

Attacks by angry tribes on oil pipelines have made it more expensive to produce and transport food and water. The government now has to import fuel, doubling its monthly import bill to around $500m. The tax take, never large, has vanished. Central bankers are under pressure to raid reserves, said to be around $4.5 billion. Factories are shut because they lack fuel. Countless casual jobs have been lost.

While the economies of nearly all Arab countries have been hurt by protests, Yemen’s decline has been more dramatic because it was so poor to begin with. Mr Saleh, wounded last month in a bomb attack on his presidential compound and now in hospital in Saudi Arabia, has presided over an economy as centralised as it is corrupt. 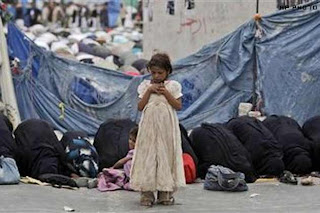 Since the early 1990s two shocks have reshaped it. First, Yemen’s refusal to endorse military action against Iraq when Saddam Hussein invaded Kuwait in 1990 so annoyed the Saudi and Kuwaiti governments that they expelled a million Yemeni migrant workers, costing the country huge sums in remittances. Second, at around the same time, oil was discovered in Yemen, so that a population that had been economically autonomous began to depend heavily on a suddenly richer state. Mr Saleh had previously asserted his power via handouts to tribal sheikhs and political allies. With more money available, a culture of corruption took root.

“Saleh institutionalised bribery from the coast to the mountains, encouraging it rather than punishing it,” says a businessman in Sana’a. The Yemeni elite’s route to prestige, he explains, was to have a job in government and exploit it to make money, a problem that went right to the top. Even as the government subsidises petrol at a cost of around $2 billion a year, at least 10% of it (and perhaps more) is smuggled on to the international market. One of Mr Saleh’s former advisers allegedly used army vehicles to take the stuff to Saudi Arabia.

Corruption, the absence of properly enforced commercial law, poor security and a badly educated population have impeded business for Yemenis, scaring off most foreign investors. Mr Saleh was so preoccupied with securing his political base that he ignored economic development, appointing incompetent stooges rather than qualified technocrats to run projects such as a vaunted free-trade zone in the port of Aden, which has never taken off.

In any event the oil revenues that bolstered the government in the 1990s are disappearing fast, and reserves too. Mr Saleh’s patronage network has been torn apart as his power to pay off an increasingly resentful population has dwindled. Yemen has long looked to its big, rich neighbour, Saudi Arabia, to bail it out; 3m barrels of Saudi oil have arrived in Aden, which should ease things for a while. But Saudi resources and patience are limited. Aid workers fear that Yemen is too chaotic and geopolitically insignificant for large-scale aid and loans to come its way.

For years, it has been clear that Mr Saleh’s removal was a prerequisite for economic reform. Now that he is gone (although he may yet try to come back) Yemen is so utterly ruined that the upheaval following his departure is as likely to kill the economy as to cure it.