Is Yemen trapped by the Saudi/American influence? 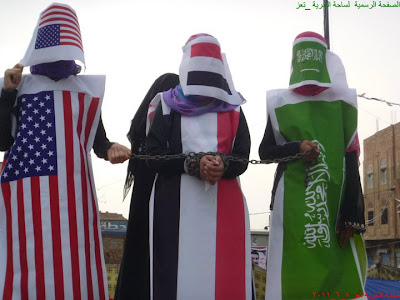 The photo represents how Yemen's political landscape is being controlled by the Saudi/American roles. It's believed that those two countries are playing a major role of how things are unfolding on the Yemeni ground. I wonder; is that true? or is it only an excuse of how and why Yemen's uprising is getting complicated more than ever; day after day???

The well-established Yemeni writer and journalist, Abdel-Bari Taher stated that the United States of America perceives Yemen through "Saudi Eyes".

He emphasized on that the American role was very supportive to Yemen's Uprising at the beginning but it got very quickly shifted to not being supportive role after being influenced by the Saudi role. Taher accused Riyadh of failing Yemen's uprising that looks for democracy and establishing a modern civil state.