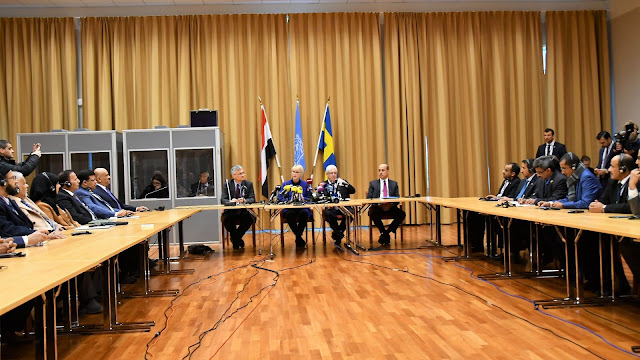 Among many political losses—from Yemen’s National Dialogue Conference’ (NDC) and the Houthis’ takeover of Sana’a in mid-2014—was the loss of women’s political power. At the time, Women secured thirty percent representation in the NDC and took part in the Constitution Drafting Committee, for the first time in Yemen’s history ensuring a thirty percent in any future committee formation.

Yet today, in the conflict resolution process, Yemeni women are almost without any political power at all. Yemeni women today face the same marginalization of other groups such as the youth and southern secessionist movement who are also absent from the negotiation table. Women, however, are doubly excluded as they face gender-based marginalization.

“Yemeni political parties’ leadership has always been occupied by men and that has reflected itself in the lack of female representation in all these peace talks,” notes Ghanem. “This should not be an excuse though, and the Yemeni government has to fulfil its promise of the thirty percent quota for women; which is part of the three references (implementation of the GCC Initiative’s mechanism, the NDC’s outcomes and Security Council Resolution 2216) and conditions for peace.”

Before the war, Yemen was consistently ranked as one of the least developedcountries in the world. In terms of its female population, this translated into legal discrimination, illiteracy, child marriage, and a high maternal mortality rate. Former Yemeni president, Ali Abdullah Saleh’s decreed a fifteen percent women quota in 2006; yet only two of 301 members of parliament were female instead of forty-five.

The conflict today has made Yemen the world’s worst humanitarian crisis. Looming widespread famine threatens everyone in Yemen and, women and girls tend to be the most vulnerable. The war has led to a rise in child marriageand to a sixty-three percent increase in violence against women. Dozens of women detainees are held without charges and face torture and mistreatment in Houthi rebel prisons. For more than a decade, Yemen has been the lowest-ranking country in the Global Gender Index, with a gender gap estimated today to be ninety percent or more.

Nonetheless, Yemeni women’s political activism has continued and received the support of the international community. The UN Special Envoy for Yemen, Martin Griffiths (and his predecessors, Jamal Ben Omar and Ismail Ould Cheikh Ahmed) have ensured women’s political participation in peacebuilding processes through creative ways, in order to apply "UN Security Council resolution 1325." Over the four rounds of Yemen peace talks in Kuwait, Geneva, and Stockholm; women have worked closely with Griffiths’ team in a variety of advisory groups.

As I attended and covered the recent Stockholm peace talks, I met those women members who participated in three groups. Two groups were supported by the UN envoy’s office: 1) “Women’s Technical Advisory Group” comprising eight Yemeni women, 2) “Political Advisory Group” consisting of three men and two women and 3) “Women’s Pact for Peace and Security” group that’s supported by UN Women. Membership in these groups has changed over time.

“All these groups have compensated for the lack of women’s political participation, as the warring parties refuse to include sufficient female representation at the negotiation table,” says one female member speaking on condition of anonymity. “Some in both parties make the excuse that the UNSC 2216 resolution didn’t mention women representation in the negotiation process, some think it’s still not the right time to include women at this stage of the conflict resolution process, and some simply think that women are less competent in leadership.”

The setting of the recent Stockholm peace talks has given these women groups better access to engage with the two warring parties’ delegations. Jamila Raja, Yemeni diplomat and a member of the Political Advisory Group believes that this opportunity has made her more knowledgeable than ever of the two sides’ needs and fears, and given her a sense of her influence. “Our work in the group focused on thinking of ways to find common ground between the parties; which was a challenging task. We weren’t at the negotiation table, but we managed to work on agreement proposals.”

More, however, needs to be done, says Dr. Najat Joma’an, Professor of Management and Finance at Sana'a University, and a member of the “Women’s Pact for Peace and Security” group. “These groups are a good step, but we need an effective women’s political participation [process] and both parties have to be pressured to include women in their delegations.”

A creative way to do so suggested by Ghanem is to induct women members in these peace talks. “I think the UN Special Envoy could play a different role in his gender representation approach than how things look like right now,” explains Ghanem. “While each party is asked to bring twelve members, I think Griffiths could increase the number of members and ask the parties to bring; say, sixteen or seventeen members, and dedicate these new seats for women only, and if a party fails to bring the women, the seats shall remain empty.”

A political will from the warring parties and the international community to address the political marginalization of women is key for increasing women’s political representations in Yemen’s conflict resolution process. Meanwhile, it is important that Yemeni women from all sides of the political spectrum keep playing a central role, within the available space.