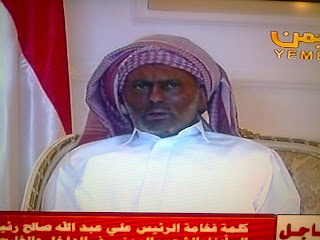 Yes that is true ,, Saleh is still alive! When I was just starting to believe that he would not appear anymore he popped up on the national TV channel and delivered one heck televised speech right from Saudi Arabia ! I feel that I`m feeling millions of feelings at the same time . He seemed to me unbombable! What could ever defeat\break this man?! I would like to just ask him from where do you, Saleh, bring this determination to keep going????? His TV appearance is just another link in a chain that Yemen has been struggling for almost half a year to break that chain. I remember that I saw Saleh's son Ahmed smiling from his heart during one of his TV appearances and I thought, Gosh! why was he looking so happy like that? Now I know that because the son knew that he's father was alright and he would be back soon. Saleh's TV appearance adds another scale of complicity on Yemen's uncertain futuer. At this crucial moment, I ask myself "Would Saleh come back to Yemen and enact a deadly revenage to whomever attempted to kill him?"