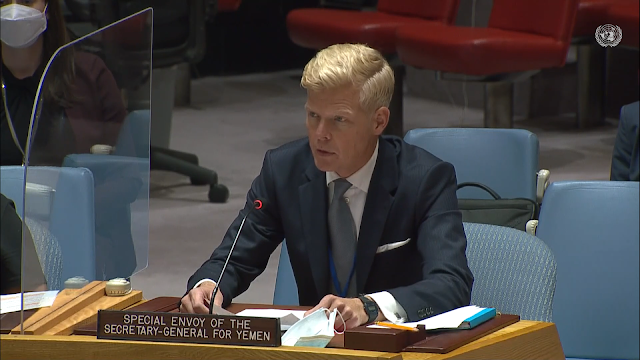 As Grundberg begins his role, the impact of the conflict on the humanitarian and human rights situation should be at the heart of his talks with the parties to the conflict. By mid-2021 the armed conflict in Yemen had killed almost a quarter of a million people, resulting in the world's worst humanitarian crisis, and contributed to serious human rights abuses with no end in sight.

The following are some key immediate humanitarian and human rights concerns documented by Human Rights Watch, the UN Group of Eminent Experts on Yemen, and other local and international rights groups.

Investigations by Human Rights Watch, and other rights groups have identified widespread abuses such as arbitrary detention, forcible disappearance, and ill-treatment and torture in detention facilities controlled by parties to the conflict. Houthi forces detain and prosecute dissidents, including religious minorities, women, and journalists. The UAE-backed Southern Transitional Council (STC) has been responsible for arbitrary detentions and enforced disappearances, and has held detainees in extremely overcrowded conditions despite health risks stemming from the Covid-19 pandemic, Human Rights Watch found.

In March 2020, Human Rights Watch documented abuses by Saudi military forces and Saudi-backed Yemeni forces against civilians in al-Mahra governorate, in eastern Yemen, including torture, forced disappearances, and arbitrary detention. The Yemeni government has also been responsible for detention-related abuses, including torture and rape of migrants from the Horn of Africa.

A deserted supertanker moored off Yemen’s coast risks spilling over a million barrels of crude oil into the Red Sea. The UN says a spill would have catastrophic environmental and humanitarian consequences, including destroying livelihoods and shutting down the port of Hodeida, a lifeline for millions of Yemenis who depend on commercial imports and humanitarian aid. Despite this risk the Houthi authorities have not allowed UN experts to secure the tanker.

Yemen’s economy has been ravaged by years of conflict. A recent unannounced decision by the Saudi Labor and Social Development Ministry to terminate or bar renewal of the contracts of Yemeni workers’ who live and work in the kingdom puts at risk the largest source of foreign exchange in Yemen and also puts at risk hundreds, possibly thousands, of Yemenis forced to return to the humanitarian crisis in Yemen. The Saudi authorities need to suspend this decision and allow Yemenis to remain in Saudi Arabia with the ability to work.

Human Rights Watch has documented severe restrictions by the Houthi authorities, the Yemeni government and affiliated forces, and the UAE-backed STC on the delivery of desperately needed humanitarian aid. While aid funds are also in short supply, Human Rights Watch found in 2020 that the obstruction of aid is exacerbating the country’s dire humanitarian situation and weakening its response to the Covid-19 pandemic.

The Saudi/UAE-led coalition has forced the Sanaa International Airport to remain closed since August 2016, which has severely restricted the flow of food, fuel, and medicine to civilians, in violation of international humanitarian law. While the coalition eased some restrictions, it continues to prevent much aid and nearly all commercial imports from reaching Houthi-controlled ports, which has an unlawfully disproportionate impact on civilians’ access to essential goods.

Given Yemen’s limited testing capacity, it is impossible to know the actual number of Covid-19 cases in Yemen, but it is estimated that the true number of cases far exceeded the number reported. In March, Yemen received 360,000 doses of Covid-19 vaccines out of the 14 million doses it is supposed to receive through the Covid-19 Vaccines Global Access program (COVAX Facility). Only ​​0.5 percent of the population had been vaccinated as of September.

Human Rights Watch found that the Houthi authorities have suppressed information about the dangers and impact of Covid-19 and undermined international efforts to provide vaccines in areas under their control. Health workers in Houthi-controlled areas told Human Rights Watch that the Houthi authorities’ barriers to obtaining vaccines have created unnecessary risk for medical workers, which could further devastate the country’s healthcare system.

Given Yemenis’ urgent medical needs, the Houthi authorities should immediately lift all barriers to vaccination and allow health workers to safely perform their vital role.

Years of violations have shown that parties to Yemen’s conflict have little incentive to halt their abuses without the real possibility of accountability. In the UN’s attempts to create lasting and durable peace, justice and accountability are key. The UN Security Council should impose sanctions against all parties committing violations and serious crimes rather than only the Houthis.