In the wake of yesterday's fighting in Sana'a, images appeared of the destruction around the presidential palace area. 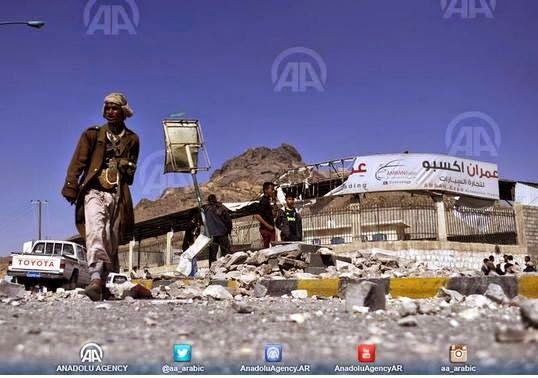 Even though there was a ceasefire made out of a truce not an agreement, fighting resumed today as its second day of violence in the city. Fighters from the Houthi group battled guards at the Yemeni president's private home and entered the presidential palace. While the fighting went on and off, two people were killed in today's clashes(1).

The intense fighting in Sana'a over the past two day has left at least 10 people killed and dozens injured. A raw video of the aftermath shows some of the destruction:


As the Houthi rebels swept into the presidential palace, they were raiding offices and looting arms depots, according to Col. Saleh al-Jamalani, commander of the force that guards the palace(2).

Was that a coup or not? not clear yet. Government supporters have accused the Houthi rebels of pushing for a coup to depose the Hadi government(3). A great indication of the falsehood of calling it a coup is that Al Houthi movement's current Godfather, Abdel Malik Al Houthi just made a televised speech where he proposed a roadmap to resolve problems. He neither announced it was a coup, nor he announced appointing himself as the "new president":

No news have been reported from Hadi himself, so far. Allah yuster.