People of Yemen Stand with Palestine

While people of Gaza continue to be bombarded with Israeli rockets for the third day in a raw, people of Yemen made sure to show their solidarity with Palestinians. 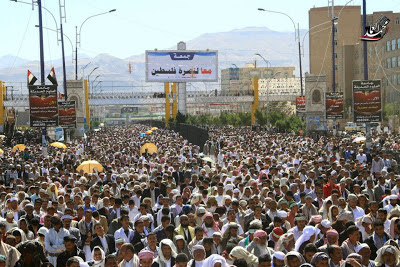 Yesterday was the Friday of "Together to Support Palestine" in several cities in Yemen. Dozens Palestinians have been killed by the Israeli forces and more than hundreds were injured. On the other hand, the armed Palestinian resistance has attacked several points in Israeli killing at least 2 people.

I can't stop wondering how Arab governments, in different political contexts, would send each other troops to have a bloody crackdown on its own people/protesters, while no one give a damn about what's going on in Gaza! I was with Human Rights defender, Maryam al-Khawaja last week and we had long discussions about the troops sent to Bahrain by the Saudi Arabia Kingdom and the other troops sent from Yemen, Jordan, Pakistan and other countries. I felt ashamed that my country Yemen, is not only oppressing its own people with its soldiers, but also exporting that oppression to other countries.

I humorously tell Maryam, "Pan-Arabism is so important to us that we can send troops to each other. It's only important to enhance oppression." Maryam laughs but tells, "we can't blame the police officers. We must blame the governments and take them accountable."

I wish Arab governments would care enough to seriously take an action to stop the bloodshed in Gaza and Syria. Enough killing! Enough destruction!

Regardless of what Arab governments do, looking at the grassroots, like in Yemen, people show an unconditional solidarity with Gaza and Palestine.

Gaza, we are sorry.