Constant developments on the security or/and politics level in Yemen keep on going.

There has been a huge explosion in Sanaa city, inside a weapons dealer's house, named Jarman, few hours ago. The explosion was in the middle of the city, where it's a heavily residential location. The area is precisely named al-Jaza'ar street and it's regarded as a location where many VIPs reside.

Seventeen people were reported to be injured. Right after the explosion, armed groups (supposedly, they were his loyalists) and the police rushed to the scene and made sure that the press don't have an access to film and report from the scene. In fact, they were firing gunshots randomly to scare the people away.

Since the explosion is related to a weapon dealer, understandably, it became a ver confidential affair. Bear in mind, this is the second recent explosion taking place in a weaponry compound or sort of. Gen. Ali Muhsen al-Ahmar's weaponry compound located inside Sana'a has witnessed an explosion, last Oct. 2012. (Read more)

The people of Aden celebrated the 45th anniversary of independence from the British colony, today. Thousands filled the streets with mixed purposes and demands.

The following picture is from the the great march people of Aden had today. And the demand to 'independence' seems to never cease. The old independent Aden's flags are everywhere. 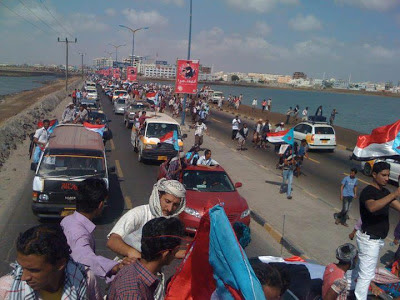 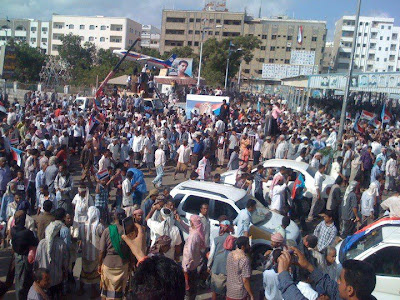 And here is people of Mukala city in southern-east of Yemen, showing their solidarity with people of Aden and the south's demand for 'independence'. 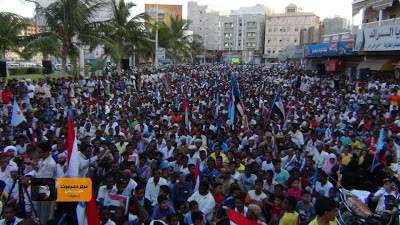 Interestingly, there was another demonstration in Aden to celebrate the 45th anniversary of ending the British colony AND confirming their demand for Yemen's unity. 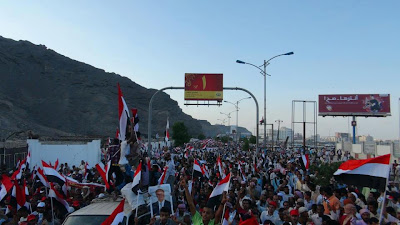 People of Sana'a made sure to show unity with Aden's Independence 45th anniversary. Today's Friday prayer was titled, "In the memory of Independence, we demand a decision." (Referring to the protesters' refusal to any dialogue before the resignation of Saleh's relatives from governmental positions, and solidarity with Aden's celebration) 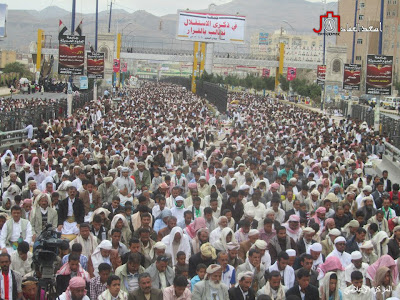 President Hadi didn't forget to address the nation with a televised speech via a TV host, on the occasion of ending the British colony anniversary: