Yemen's central security forces have mysteriously hid/arrested hundreds of people for one political reason or another, during the uprising. The prisioners neither had a trail nor their families heard from them. Those hidden prisoners just disappeared. Just like that. That practice has started long before the uprising and everyone knows that the state security forces are to blame (since Yemen is just another police state). Here is a graffiti art in Sanaa by artist Murad Sobay who wants the walls to tell those hidden prisoners' stories. (Read more in Ar) 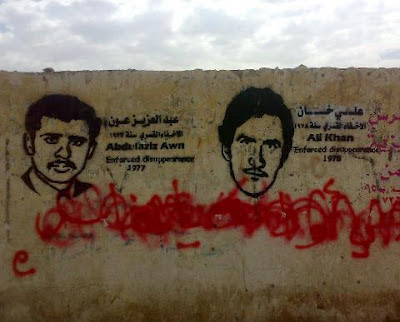 Yemen's Human Rights ministry have worked on collecting 196 names of prisoners who were arrested during the uprising and the ministry managed to release 168 of them while ago. Still, hundreds of families await releasing their loved ones from the state prisions. However, the main obstacle in elminating the forceful hiding of prisoners lies under the fact that Yemen has not endorsed the international convention for protecting all prisoners from arbitrary non-judicial imprisonment.