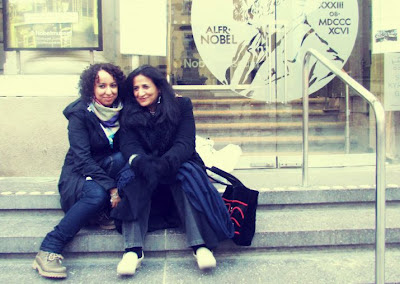 It was one of the best days of my life when Amal Basha visited Stockholm in April 2012.


One of Yemen's fearless freedom fighters, (my guru) who's at present works as the spokesperson of the preparatory committee for the National Dialogue Conference scheduled to take place in Yemen in around one month, Mrs. Amal Basha is gracefully dealing with two obstacles, currently:-

-She's been fighting for women's rights in Yemen since I could ever remember and the top priority for women's rights in Yemen is to stop the horrific child marriages. She, along with a number of civil society organizations in Yemen have been pushing the parliment to pass a law that could ban child marriages by setting a minimum age that's 16 or 17 for girls and boys to be married off. Sadly, that demand has never been realized.

As an extention of her work, she's today determined to put that demand on the top of her coming report about Prioritis for Women's Rights in Yemen, a report that is supposed to be discussed in the coming National Conference. All sounds great but on reality that's been a very tough task for Basha to do. Conservative/islamist individuals/groups are giving her a tough time. Why? Because child marraiges, in core,is build-up on a deep religious stance and calling to ban it is unacceptable for that kind of mentality. Having said that, Basha is currently facing a horrible critique by hate comments/messages (and God only knows what she is facing on the ground) saying that it's a bulshit demand (child marriages) she is pushing for.

This kind of war is not new to her. There have been similar several stituations when she had hard times by such irritating groups including corrupt govermental officials. However, She has been always a fearless brave fighter that seeks nothing but improvement and better conditions for femals in Yemen. Admittedly, she's been known for her bravery in standing firm agianst all the hatered and threates she encounters.

-The second issue she's currently facing is a media propaganda campaign against her by "unknown groups" who have posted a private picture for her that looks "not cool" for lots of conservative ignorant Yemeni groups. I don't want to go in details about the picture because I truly believe it was a very private one and I can't understand how it went on Facebook in the first place. But, isn't like a perfect timing for that picture to come into light while her work on the Child marriages issue is on the table? hmmm..

I'm blogging about Mrs. Amal Basha while I vividly remember our conversations together when she recently visited Stockholm for a conference. I surely can say that Basha is a person who has an endless passion and diligence for women's rights wherever they are. I have always looked upto her. She is my guru. Period.