Well, it's just overwhelming! The Danish Cartoons deja vu all over again!

The American embassy in Sanaa is the latest outpost of Washington to come under attack from angry Muslim protesters outraged by a blasphemous film about the Prophet Mohammed. At least 4 person has died and 53 have been injured.

Initially, I was wondering; will the US ambassador survive? Will Yemeni protesters kill him? Will Libya's scenario take place in Yemen? I definitely won't that to happen. Reportedly, the ambassador and the staff never been hurt.

The thing is, I have been to the US embassy several times & I can't tell you how extremely tight is the security there. What happened today was unbelievable!

"When will we learn to hold peaceful protests without breaking into embassies, causing violence & getting innocent people killed," tweeted Yemeni blogger, Noon Arabia.

"Protesting is a right but violence and looting is pure recklessness.....period! Nothing is more disgusting than watching a small group of reckless people trying to hijack the extraordinary image of Yemeni protesters through out more than a year of peaceful struggle. Storming the US embassy in Sanaa today is planned and far away from being spontaneous." Facebooked Yemeni activist, Ibrahim Mothana. 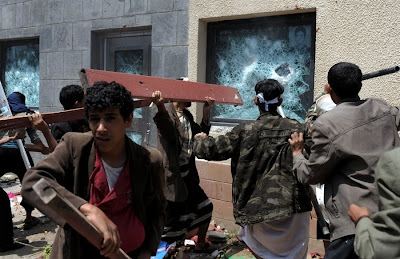 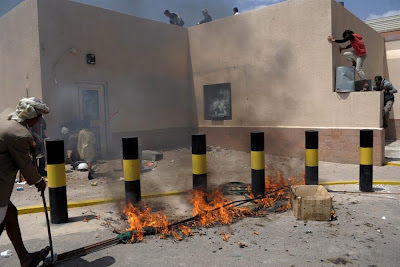 Tomorrow is Friday and it's absolutely expected that Muslims around the world will protest against the film; part of the Friday prayers. Let's hope the protests will pass peacefully!