Another terrorist attack took place today in Yemen, at my favorite Yemeni city, Aden. When I was a kid, I'd always visit Aden to seek tranquility and peace but that's just a history today. Around 18 people were killed after an attack/bomb explosion at the intelligence headquarter's building in Aden (More info). Al-Qaeda is blamed of carrying out the attack. The Radio and TV station's building was damaged as well since it's located near to the intelligence HQ. Remember, people shall celebrate Eid tomorrow... what kind of bitter Eid that would be!

Here are few photos of the scene: 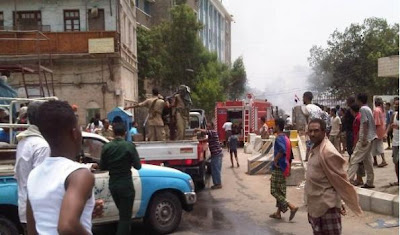 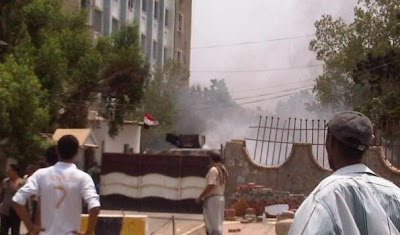 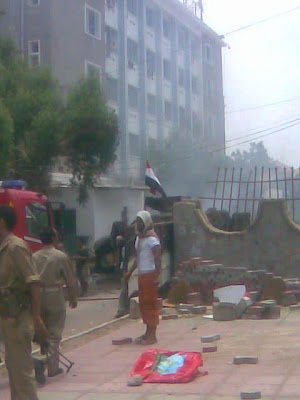 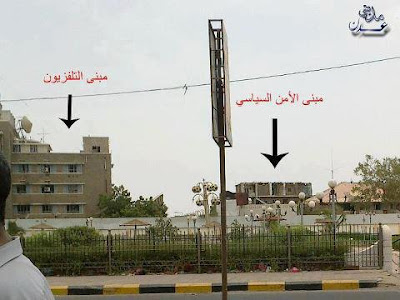 According to Aden fb page, there was also another explosion hours ago at the governance's building.(more info) 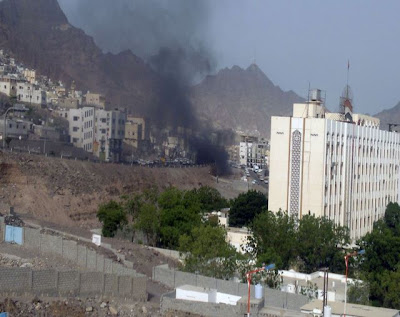 Around two days ago, a leading oppositional political figure, Ahmed al-Husseini was arrested upon his arrival from UK to Aden's airport, by the authorities. He has served as an ambassador for Yemen in Syria several Years ago then he joined the (Herak) secessionist movement in Yemen. Later, he sought a political asylum in UK, in 2006 where he resided for the years ahead. He is one of the faces of the secessionist demands for the southern part of Yemen.

I was very outraged about his arrest because of lots of reasons but mainly because it was like sending a message to any southern political figures who's abroad to think again if s/he wants to come back to Yemen.

However, he was released today (more info) I can't wait till I read any interview made with him after his release. It'd be very important to know what exactly happened with him.

On the other hand, Ali Salim el-Beidh who once hold a top political position in the former South Yemen as general secretary of the Yemeni Socialist Party, and later as Yemen's ex-vice prisendt and one of the leading opositional poltical figure who has been calling for the Herak movement since 2006 or 2007 , reportedly, has made a TV appearance today on one of the national TV channels of Aden.

He addressed the southern nation to continue their struggle in the name of independence. (I couldn't get hold of a youtube link about that) but here is more info on that here. Ali Salem seems to be diligent in his calls. I often gets lots of critique once I mention the Herak issue and things related but I truly believe we gotta discuss this. It's an issue that we must not ignore!

Peace building seems hard to get in Yemen at the moment. Why? Let me get it straight. As long as Saleh is still in Yemen & his son is planning to run for presidency in the coming years, we'll have never peace in Yemen. Al-Qaeda's activities are a lucrtive businsee for them; Saleh and his gang. (More info)


Earlier this year, I met one of the activists from Aden who was visiting Stockholm, "Aden is becoming a very dangerous zone. One can't know if he shall return home alive once he steps out of his house's door," she told me with a very sad voice.

And I leave this here ..