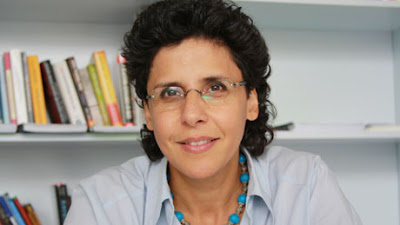 Since I ever got to read one of her articles and I always feel so happy when she publishes a new piece. I carefully read her pieces because she mostly writes about the Taboo topics in the Arab World; "Sex, Religion, and Politics" - I'd add a very important taboo topic that's "Women's Rights" in the muslim Arab countries which she mainly focuses on. Based in Switzerland, Dr.Elham Manea is a fearless Yemeni writer who passionately examines the violations against our- women's- rights within her fantastic writings.

One of my most favorite topics she wrote about was about Hijab (head scarfs for muslim women). Her piece was titled, "Take Off Your Hijab" - you can read it here. That piece is just a slice of a series of bold pieces she already has wrtten. Unfortuantely, I have not read one of her many published books YET. That would be in my reading-book-list, definitely.

The reason I'm blogging about her is that, thanks to google-translate, I just read her piece about her thoughts of what shaped her life and career. I found it very interesting. I was very happy to know as well that she is going to speak at TEDxBern in Switzerland coming September and I really can't wait to e-watch her speech. I truly admire her and all her works, and I'm sure she'll be amazing in her speech.

Dr. Manea was kind enough to send me the original piece (read below) that she wrote in English for Mag20. If you'd like to read more of Dr. Mana's pieces, you can follow her blog here.

Human Rights Are Universal Without a‘But’

What makes a person? What drives him or her to be the person he/she became known for? Sometimes I wonder; would I have been the same, if it was not for the eyes of my mother? The silent echoes of her eyes have hunted me all my life. If it was not for those echoes, I would not have written صدى الأنين (Echoes of Pain)- my first Arabic novel.


Would I have been someone different, if it was not for the voice of my father? Just like my mother, he talked long with me, about life, death, religion and the freedom of the human’s will. His idea of playing with me as a child was to recite a part of poem, and I have to start a new one with the last letter of his part. I loved his games. He was the philosopher that believed in me, more than I did. Dream of the stars, work hard, and with a bit of luck you will capture them in your hands. I never understood what he saw in me, but I learned overtime to trust his faith in me.

My mother’s stories were different though. Hers were formed by pain: pain of being a girl, circumcised at eight; pain by being cursed by her beauty, and therefore married off by her father at the age of 13 – better to marry her early and make her the trust of another man; and pain by the stories of women she knew – painful stories - a pain that was often interrelated to man. Man was not to be trusted. Man inflicts only pain. But then I had a man as a father! And God he was wonderful to me. He was my hero.

Over the time I learned how to make a story complete by looking at the different aspects of it. To hear my mother’s stories, would not be complete without hearing the voices of my father and all the men involved. Over the time I started to recognize the pain caused by injustice and discrimination but situate them within the social context that causes them. To change that social context means to change culture. And religion is part of that culture. It has to be reformed. Over the time I started to understand as well that to end injustice and discrimination, one has to fight for these ideals. Nothing comes for free. Rights have to be earned.

Traveling constantly between different Arab, Islamic and Western societies because of my father’s work as a diplomat made me the person I am as well. It does not really matter where you come from, your colour, religion, or gender, in the end you are a human. Everywhere I went I met humans. And everywhere I went I saw and heard of stories of discrimination. Discrimination is universal and so are the human rights that should be protected to end these violations.

Is it too much to ask? To insist that human rights are universal? Is it too much to persist in the belief that no one, no society, no state, no culture and no religion can use ‘a relativist’ argument to get away with violations of human rights? Human rights are universal. It is as simple as that. Many Arab States, conservative and Islamist groups, in addition to Western cultural relativists, claim that a woman should be deprived of her individual freedom and right to choice because her religion and culture dictates so! Their argument does not only reflect on women’s lives. It does also have consequences for the minorities living in these societies and for those who fight for the freedoms of religion, speech and political rights. I believe their argument is wrong and I am taking a clear stance against it.

Taking a clear stance against violations of human rights requires action - mine almost always has involved words- writing has been my way of breaking the wall of silence. I can breathe through the words.

I write in three forms: literary, opinion articles and research. Would you be surprised to know that I did not invent any of the stories that I told in my two novels Echos of Pain صدى الأنين (Beirut: Saqi Books, 2005) or Sins خطايا(Beirut: Saqi Books, 2008)?
Why should I invent a fiction, when reality surpasses any fiction in its brutality and absurdity? Writing in a literary fashion is one way to hold a mirror and reflect the social diseases and hypocrisy that plague my societies. I am gathering material for a third novel, but time has not been kind to me.

I made my name though through the opinion articles I have been writing since 2005. Thanks to the internet i was able to write about issues and ideas that were until then forbidden and censored in Arab media. Through this window it was possible to discuss issues of reformation of Islam and the human nature of Quran, human rights (which include women’s rights), citizenship rights (minority rights and equality before the law) and democratic reform. These articles have been published by different Arab websites and online magazines. Despite the hate messages I have been receiving, overtime, with persistence and stubbornness, I seem to have gained a reluctant acknowledgment that I do actually believe in what I say.

As a researcher, on the other hand, I try to investigate reality scientifically to learn the roots of our problems and how best to change and reform. I am a political scientist, but I have little respect to grand theories, when they neglect the very reality they try to explain. I prefer to look at the context of the phenomenon under investigation and from there draw the patterns that can explain it. It was this approach that I used when I tried to research the political dimension of women’s rights or more accurately the lack thereof in Arab societies. The result was published in a book by Routledge in London in 2011 entitled The Arab State and Women’s Rights: The trap of authoritarian governance. Building on this project, I am trying now to launch a research project that investigates legal pluralism in different context, especially in European societies, where the presence of Muslim migrant communities has led a country like Britain to introduce Islamic law in its legal system. I would like to research the consequences of introducing Islamic family laws in a European context.

This is the sum of what I am doing now: to write hoping that this, together with the work and efforts of the many reformers in the region will have some impact on the long term. I have always said I will stop writing when I give up hope in our ability to change and reform. So far, I have not stopped writing. Hope is still alive despite the disappointments, and these are plenty!

Dr.Elham Manea will be one of the speakers at the first TEDxBern, on the 5th of September 2012.