One of the leading influential feminist and human rights activist in Yemen, Amal Basha faces another episode of the censorship series in Yemen. Her Facebook account has been disabled, this afternoon, after it received a great deal of reports as spam or similar reports. Long time ago, the official website of her organization (The Sisters’ Arab Forum for Human Rights) has been also censored by the goverment for her outspoken and brave reportings about the violations against women's rights in specific and human rights in general in Yemen.

"This afternoon her facebook account has been disabled due to fake reports that her account is an alias and does not represent her. Also, her public fan page has been deleted," says her son, Luai Ahmed . He adds, "The account had 5,000 friends and almost 6,000 subscribers.. Normally facebook accounts are disbled for pornographic or offensive posts. However, Amal Basha's account, on the contrary, was committed to civil debates, informative and diverse causes. I urge all her friends and supporters to report to facebook's administration about this so she can regain her account and fanpage." 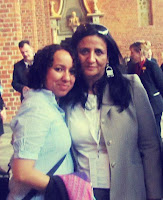 I was very lucky to have met Amal Basha during her recent visit to Stockholm, last mid April and we agreed that I'd create and manage a blog for her. Since then, I pleasurably created the blog and made sure to post her valuable writings that she used to post of her Facebook page. However, like what Luai mentioned, I would urge all friends to help us regain her Facebook page by contacting Facebook admin.

This is not the first incident of e-censoring leading activists in Yemen. Nobel Peace prize laureate, Tawakkol Karaman's official website for her organization "Women Journalists without Chains" has been blocked by the authorities for awhile in the past. Recently, one of the leading feminist activists, Arwa Othman's Facebook page has been blocked as well after a huge number of reports were sent to Facebook to delete her page. Othman used to actively write in her status about Yemen's uprising, critique against former president Saleh and many Yemeni corrupt officials, calling for civil state, liberalism and other controversial topics. She has not regained her Facebook page but she managed to create another one.