Yemen Lost One of its Female Change-Makers; Fatima al-Aqel

With great sadness I received this news in the morning; that Fatima al-Aqel passed away, last night. As I have the chance to meet her couple times when I was in Yemen, I can honestly say that Yemen truly lost one of its great female change-makers. In 8th of March, 2010, I was delighted to write a piece about her for a great event; that's the International Women's Day Celebration 2010. Al-Aqel was one of the honored women, along with Nobel Peace Prize Laureate Tawakkol Karaman and other outstanding women in Yemen. 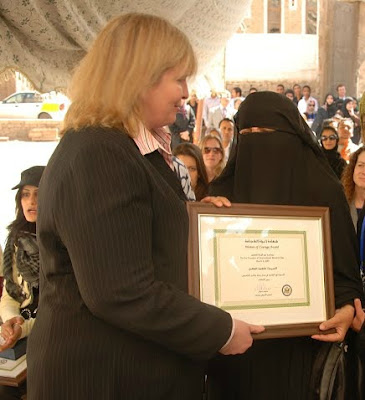 
And here is an interview made with Fatima al-Aqel, Sept. 2008


I would like to re-post this piece in remembrance of this great lady that Yemen was lucky to have once.

She was one of Yemen’s brave women who broke all the barriers and challenged her disability. She was so determined to shape her own reality by her own hand, regardless of any challenge she had. She was firm to make a difference and bring a change to society, especially to girls who had the same disability as she had. Fatima al-Aqel, chairperson of Amaan Foundation for blind females’ care, has been diligently working for more than a decade promoting girls’ rights who have sight disabilities and encouraging equal chances for them in all walks of life in Yemen.

Fatima al-Aqel lost her sight during her studying at University but never let that stop her from finishing her study. She was an educated woman and BA holder from Arts College, Cairo University. She also obtained Diploma in Islamic studies. Her sight lose didn’t stop her life course.
In 1995, she established one of the first foundations in Yemen, Amaan Foundation for blind females’ care, fostering girls with sight disabilities. The foundation had a shy beginning by nurturing 5 girls only. With the passage of time, it used to foster around 800 girls across the country and work in spreading its main objective that was to integrate blind girls in all life levels, schools, universities and workplaces. Amaan rigorously sought providing full and comprehensive care for every blind girl within the foundation. Continuously, it tried to offer the best care and the tenderest attention to all the girls.

The foundation’s key theme was the idea that just because a girl lost her one sense, eye sight, didn’t mean she lost her all senses. Accordingly, she must not be deprived of her basic rights such as education. For that reason, Amaan works in a close partnership with other foundation catering to blind girls. Mainly, the cooperation was educationally. Amaan worked closely with Education Ministry and other foundations for blind girls in order to enable each blind girl to have accesses to educational services and facilities no matter what.

Amaan’s goals were simple yet challenging. To advocate blind girls’ rights, to introduce parents to their blind daughters’ rights and to protect girls of sight disabilities from all exploitation forms were some of the foundation’s principle goals. In addition, conducting projects and programs enabling implementing integration for girls with sight disabilities to integrate in society was the core goal of Amaan.

Moreover, strengthening efforts on encouraging more services for sight disabilities girls and raising awareness on rights of blind females among the society were Amaan’s additional aspirations.


Out of the foundation’s truest aim at providing complete attention to many girls through as many places as possible, it expanded its presence and opened its branches in Taiz and Ibb governorates.

One of Amaan’s big achievements starting from catering to only 4 girls in Sana’a and currently catering to around 96 girls in Sana’a only was a remarkable progress. Around 30 girls were in Universities and 29 girls have graduated. Comparing to their shy beginning, the foundation’s current status was a great living example of how determination would definitely lead to success. Truly, al-Aqel and her achievements were embodiment of how nothing was impossible.