"What's happening in Taiz is a real massacare on unarmed civilians at their houses and there is no guarantee that anyone is safe," tweeted @TahaAbdoh from Taiz. So far, at least 13 people, including women and kids have been killed after Saleh's troops savagely attacked pro-democracy protesters and civilans at their houses. Also, dozens of others were wounded, including civilians.


While United Nations envoy, Jamal Benomar is in Sana'a to discuss the GCC's deal, extremely graphic clips from Taiz depict the real horror and crime against humanity taking place at the moment.


Here is a clip of parents telling of how their son, Hani, was shot dead; shattering his whole head while he was only at home.


And here is Hani's sister writing with her brother's blood on the wall of their house, the word (Irhal ya Safah) meaning "Murderer, leave!" ; refereeing to Saleh.

And here is when couple of women protesters were attacked with shellings at the Freedom Square in Taiz.


And this is Zaynab al-Audini who was murdered today; at the Freedom Square. 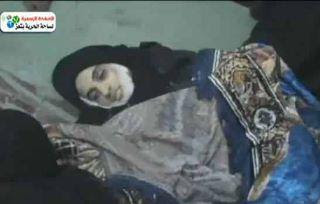 Here is Zaynab's sister mourning over the death of Zaynab

And here is Amal Abdel-Wahed, a little girl who was also murdered today


Here are several kids being rushed to hospital after they were injured during the clashes. The little girl screams with a traumatized face, "I don't want to die!"

The hospital was also shelled. Here is a clip depicting what was taking place inside the hospital while the attack