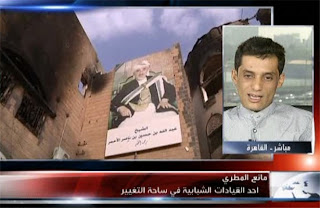 One of the leading Yemeni youth in Yemen’s Uprising; Mana’a al-Matari was arrested by the security forces, earlier today at Sana’a International Airport upon his arrival from Cairo. Al-Matari was in Cairo for several days as he was invited by the Egyptian revolutionary youth. During his stay he made many interviews with the press and TV channels and he was very outspoken about Yemen’s political situation. In one of his statements in media he said, “Yemen’s Revoultion will sweep Saudi Arabia too soon.”
He was also in Qatar where he spent one week and did several interviews with al-Jazeera Channel; meaning he did a huge NOISE against the government. God only knows if he'll be released or not!