Tawakkol Karman's Message to the US and Saudi Arabia

By Tawakkol Karman, published in NYTIMES 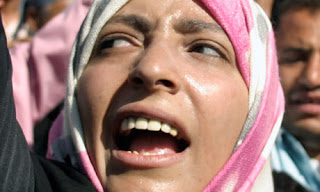 AFTER more than five months of continuous protests, I stand today in Change Square with thousands of young people united by a lofty dream. I have spent days and nights camped out in tents with fellow protesters; I have led demonstrations in the streets facing the threat of mortars, missiles and gunfire; I have struggled to build a movement for democratic change — all while caring for my three young children.

We have reached this historic moment because we chose to march in the streets demanding the resignation of President Ali Abdullah Saleh, an end to his corrupt and failed regime and the establishment of a modern democratic state. On June 4, our wish for Mr. Saleh’s departure was granted, but our demand for democracy remains unfulfilled.

Following months of peaceful protests that reached every village, neighborhood and street, Yemen is now facing a complete vacuum of authority; we are without a president or parliament. Mr. Saleh may be gone, but authority has not yet been transferred to a transitional presidential council endorsed by the people.

This is because the United States and Saudi Arabia, which have the power to ensure a peaceful transition to democracy in Yemen, have instead used their influence to ensure that members of the old regime remain in power and the status quo is maintained. American counterterrorism agencies and the Saudi government have a firm grip on Yemen at the moment. It is they, not the Yemeni people and their constitutional institutions, that control the country.

American intervention in Yemen is a product of the war on terror. In exchange for military and intelligence partnerships established after the bombing of the American destroyer Cole in 2000, the United States provided the Saleh regime with increased economic aid and military assistance. Because American security was given priority over all other concerns, counterterrorism agencies paid no attention to the human rights abuses being committed by their local partners.

Indeed, American officials chose as local partners the Central Security Forces, the National Security Agency and the Republican Guard, all of which are controlled by Mr. Saleh’s sons and nephews. As a result of their partnership with United States counterterrorism agencies, these organizations received generous American financing as well as guidance and technical assistance.

Because America has invested so heavily in Yemen’s security forces, it now seems that a transition to democracy will depend on whether Washington believes that investment will remain secure. The establishment of a new government will therefore be contingent on American officials’ approving the country’s new leaders. Sadly, it seems likely that the United States will support figures from the old regime rather than allow a transitional government approved by the people to take control of Yemen. This would be a grave mistake.

American policy makers must understand that the activists and young people who started Yemen’s peaceful revolution deeply respect the United States and Western civilization. Indeed, it was in Washington and other capitals throughout the free world that many of these activists learned the peaceful methods they employed during our revolution.

We call on American officials to engage with the leaders of Yemen’s democracy movement and abandon their misplaced investment in the old regime’s security apparatus, which has killed more innocent women and children than terrorists.

We understand America’s concerns about terrorism and recognize your right to attack terrorist sanctuaries. We have no objection to agreements that protect your security interests. We only ask that you respect international standards on human rights and the Yemeni people’s rights to freedom and justice.

On behalf of many of the young people involved in Yemen’s revolution, I assure the American people that we are ready to engage in a true partnership. Together, we can eliminate the causes of extremism and the culture of terrorism by bolstering civil society and encouraging development and stability.

We also call upon our Saudi neighbors to let us pursue a democratic path. For 50 years, the Saudi government has provided a special committee of its ministers with an enormous annual budget to intervene in Yemeni affairs. Over the years, this committee has consistently meddled in Yemen’s domestic politics and exerted considerable influence over the country’s development. In many cases, Yemeni tribal leaders and other prominent individuals have received far more generous aid payments from Riyadh than from the Yemeni government.

Saudi interference in Yemen is also motivated by a fear that the Arab Spring, which spread from Tunis and Cairo to Sana, might soon reach Riyadh. But the fear that our revolution will cross the border is unfounded. This is an information age revolution; it spreads through Facebook, Twitter and other social media, which are not subject to political boundaries.

We ask our neighbors in Saudi Arabia to stop hindering the rule of law and healthy economic development through the purchase of politicians and tribal leaders. We also call on the Saudi government to stop pursuing policies that undermine the people’s desire for democratic change. Saudi initiatives that aim to remove the president while keeping the old regime and its security apparatus intact risk unleashing a civil war, which would no doubt have dire consequences for Saudi Arabia as well as for Yemen.

The young people of this revolution have made their demands clear: authority must be handed over to a transitional presidential council approved by the people. This council will manage the country until a constitutional referendum and elections can be held. And the government’s security forces must never again be used to serve the personal agendas of government officials or to establish a monopoly on power.

Yemen’s people have charted the course of revolution and we will follow this course to its end. We have left our authoritarian past behind. Now, we ask our friends in Washington and Riyadh to help us build a democratic future.