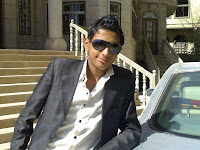 The young Nizar Salam, 17 years old and high school student was one of the protesters; rallying peacefully, in Sana’a, on 22nd of May. He went to rally with no idea of what the destiny holds for him and that that day was his last day to be alive.


On that afternoon, Nizar and a number of the protesters were blockaded at one of Sana’a’s streets –at the heart of the city- and they were overwhelmed with the constant gunfire bullets at them from different sides, and even at the neioughbouring buildings “expert snipers” targeted them directly and intentionally to hit a number of them.

One of the bullets hit Nizar’s heart and he couldn’t make it.


Nevertheless, we know that Nizar is with Allah right now and for the sake of this country’s goodness we forgive Nizar’s murderers. Forgivness is hard but for Yemen’s welfare, we should do it. Hence, I ask all Yemenis who lost dear ones during the revolution to forgive and prove to the whole world how %100 peaceful is Yemen’s revolution.