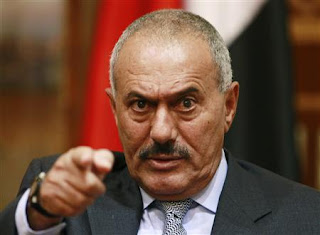 What's happening in Sana'a these days is NOT a civil war. It's Saleh's war against Yemenis' willpower.

Usually, a civil war is when different groups of certain goals have a dispute. For Saleh, it's about a fight between his and the nation's power. This wonderful nation that has been demanding its right to have change since last January - when Yemen's revolution begun. Accordingly, many sides have joined that non-violent revolution and all parts of Yemen demanded collectively for a better tomorrow, more democracy and dignity for all Yemenis.

Today, Saleh is fighting for his last days in power; seeming like a person desperate to use all tactics to remain in power. Apparently, he is starting to take the same way of Gaddafi, Bashar and Al Khalifa.

For many years, I have always known how corrupted he was and today he is proving to the world how bloody murderer he is. The other day I read about how one tribal man was killed by Saleh in a very smart way. That tribal man was one of the mediator tribal men who went to Saleh and talked to him; asking for solutions to stop the clashes. While he was leaving a small device was put secretly inside his poket to tarck where exactly he'll be meeting al-Ahmar (a key apponent of Saleh). Once Saleh's forces knew the palce, they did a missile attack!

Saleh is clinging on like never before - the dude who was pleasing the world with "I'm going to sign -- no I'm not going to sign! " speeches.

-N.M. , Their silence strengthening him!

-E.B. , The international community will wait till he kills thousands of people, then they will start thninking about doing something.. I thought we all knew that already?

-K.A. , Forget about outside help...neither expect it, nor demand it...firstly the help of Allah must be attracted. The people must establish their connection with Allah and then with courage, determination and sacrifice, drive change. Unity amongst the people and attention directed toward the creator... I know it sounds harsh-and I'm sorry; but the reality is that no one cares about Yemen. Without the help of Allah we cannot accomplish anything...I and all the ummah are praying for our brothers and sisters in Yemen. Our hearts bleed for you...

-Y. Thier an alternative to Ali? I think not. Why not demonstrate n protest peacefully for national reforms that will make a difference to the typical Yemeni citizen??????

-Z.G. - Oh yeah! sanctions, then military intervention, then Yemen pays the bill! ridicules! we don't want them. What can they do.

-H.M. , Afrah, about Clinton, compare her and Obama's speeches about Syria and Libya, you will see the language and the threat is totally different :) , Saleh was very generous to the Americans that he opened his land for free to them for any activities ( read wiki-leaks) , so he is their Allie regardless of what they say.

and no one can help us, no manh on this planet can help this nation but the nation them selves, we got to help our selves wa allah, what will saleh do? poke us till death ? in he's wildest dreams he can, for if he is thinks he's stubborn , we r more stubborn and determinant even more, with god's well, we will raise over all nations insha allah, ان مع العسر يسرا