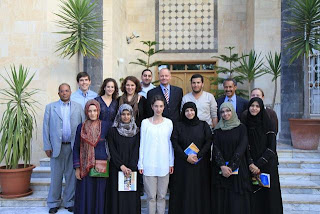 German ambassador to Yemen, Mr. Michael Klor-Berchtold, received 12 students from Yemen and Germany who are the participants of an exchange program between Sana’a University and German Ruhr-Universität Bochum. He met with the students at the German embassy last Monday to welcome the German students to Yemen and to bid the Yemeni students farewell on their journey to Germany.

This program is part of the celebrated cooperation between Yemen and Germany. In particular, this exchange program is part of an academic exchange between the two countries which aims to establish a better understanding between Islamic and European cultures through the “Islamic European Cultural Dialogue”.

The project is supported by the German Embassy-Sana’a, the German Academic Exchange Service (DAAD), and the Yemen College for Middle Eastern Studies YCMES.