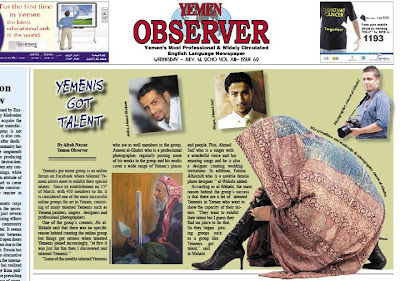 Yemenis got talent group is an online forum on Facebook where talented Yemeni artists meet to exhibit their special talents. Since its establishment on 15th of March, with 430 members so far, it is considered one of the most successful online groups for art in Yemen, consisting of many talented Yemenis such as Yemeni painters, singers , designers and professional photographers.

One of the group’s creators, Ab al-Wahabi said that there was no specific reason behind creating the online group but things got serious when talented Yemenis joined increasingly, “at first it was just for fun then I discovered real talented Yemenis.”

“Some of the notable talented Yemenis who are as well members in the group, Ameen al-Ghabri who is a professional photographer, regularly posting some of his works in the group and his works cover a wide range of Yemen’s places and people. Plus, Ahmed Saif who is a singer with a wonderful voice and has amazing songs and he is also a designer creating wedding invitations. In addition, Fatima Alhashidi who is a notable female photo designer. “ al-Wahabi added.

According to al-Wahabi, the main reason behind the group’s success is that there are a lot of talented Yemenis in Yemen who want to show the capacity of their talents. “They want to exhibit their talent but I guess they find no place to do that. So they began joining groups such as a group like Yemenis got talent,” said al-Wahabi.