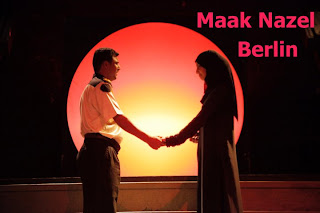 The Yemeni play Ma’ak Nazel, adopted from the well-known German play, “Linie 1” written in 1986, exceeded expectations when it was performed in Berlin, Germany, last month. The great mind behind this was the young Yemeni director, Amr Gamal, 26, who “Yemenized” the play into a mirror of Yemen’s real life. It depicted a collection of Yemen’s most important social issues and presented them comically. The issues included unemployment, poverty, the so-called marriage tourism and the issues associated with Somali immigrants in Yemen.

Prior to performing the play in Germany, Ma’ak Nazel made Yemeni theater boom like never before. Amr Jamal, an engineering college graduate, along with the 90 percent of the cast who were amateur actors and actresses, wowed audiences in Aden where it was played for 15 days. Almost 11,000 people watched the play live. After it was screened on TV, its popularity grew throughout Aden and Yemen. 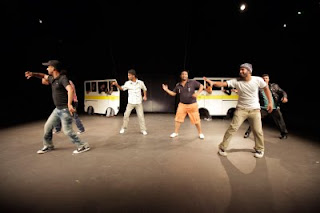 Consequently, it had the chance to be performed in Berlin, Germany, in cooperation with the German House in Yemen and several Yemeni sponsors. It was performed for two consecutive days and all the tickets were sold out before the cast’s arrival to Berlin.

The massive success was born almost two years ago. “The idea behind the play evolved at the end of 2008 and we, Ghaleeg Aden team, worked almost one year on the play before it was performed in October, 2009. My goal was to present a descent artistic work in Yemen. However, I was anxious about the play before it was performed because it was the first play in the region that has the theme of multiple stories in one work. But I became optimistic when people were attracted to it. This was my fifth play and I always write and direct all my plays,” said Jamal.

Jamal attributed the success to several factors. “This was the result of my previous plays’ relative success. Regardless of that there was no any financial profit coming out of all this. We wanted to present a new cultural face of Yemen other than that of the kidnappings and killings. Even the Yemeni Ambassador to Germany, Dr. Mohammed al-Eryani, told us that we brought one candle into Yemen’s dark reputation,” explained Jamal. 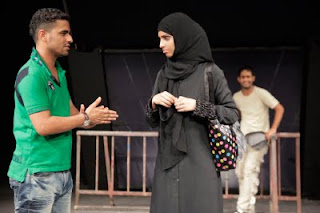 The play in Berlin was performed in Arabic but there were subtitles in German above the stage. It unexpectedly resonated with the German audience. “I didn’t expect that it would have the same success it had in Yemen because it was an adopted play from the German play, “Linie 1” and the German audience saw it almost 1,500 times. I thought the Germans were so familiar with their version that they wouldn’t welcome the Yemeni version. We were truly shocked to see at the end of the show the audience giving us a 15 minute standing ovation and the next day the German press praised that because it was very rare to see German audiences standing and giving applause for plays,” said Jamal. This was not the first time Jamal presented an adopted play. He did it years ago with a British play.

The Arabs there along with Yemenis were very proud of how the play turned out. “Despite Amr Jamal’s young age, and the humble funds and capacities the play faced, he did an outstanding job with the play. His creativity revealed nothing but an unbreakable Yemeni talent. In simple words I say, he accomplished what no others are capable of,” said Sabri Ghaleb, a Yemeni college student in Germany.

Another student, Amal Phleem, complimented the play by saying, “For me as a Yemeni studying in Berlin, watching the Ma’ak Nazel play was not about exploring the evolution of the Yemeni theater, which however proved to be better than what I expected, it was simply about home being brought to me in the heart of Europe, where for awhile I believed that I was from Berlin. Spending a pure Yemeni evening with some beautiful hard-core Yemenis and by that I don’t mean just Yemenis by nationality but also our Arab and German friends who love Yemen just as we do. It was an amazing evening for me.”


Jamal was very proud to see all the excitement coming from Germans, Yemenis and Arabs all alike. “It was interesting to see Arabs enjoying the play and never having problems with the language barrier which also gives a hope that we might perform the play in neighboring Arab countries in the future.”

“It was an extraordinary play. I enjoyed it so much that I felt Yemeni at the end of it. I can say that I discovered a new artistic face of Yemen,” said May Habiballah, Palestinian medical college student in Berlin.

The diverse audience gave the play an interesting flavor. Asma Karim, an Algerian student, expressed her fascination by the play and the Yemeni accent. “It was not a problem for me since I already have Yemeni friends in Berlin. I like the Yemeni accent and the play made me want to learn more about Yemen.” 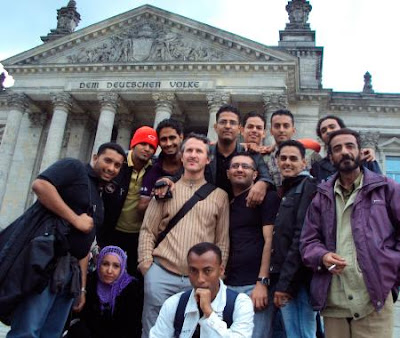 Mohammed al-Samie, a Yemeni college student in Berlin said, “they, Galeeg Aden, embody a hope for a coming enlightened and cultured Yemeni generation, fighting all the social obstacles against youth’s creativity. They broke the mold and presented something that was closely related to Yemeni youth’s issues unlike the other Yemeni works that are very far from what’s really going on among Yemeni youth.”

“Ma’ak Nazel is a great work that deservers nothing but our respect and love. Galeeg Aden are truly an icon in the Yemeni theater’s history. Without any doubts, the play is the most prestigious play Yemen has ever witnessed and a great future is awaiting for its cast,” said Abdulrahman Shubaita, Yemeni college student in Berlin.