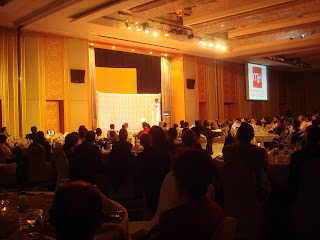 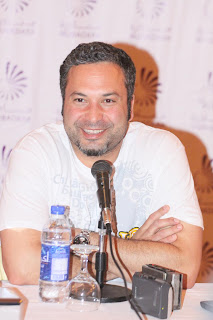 Ahmed Ahmed, the talented, humorous and well-known Egyptian American actor and comedian, performed first stand-up comedy show in Yemen, last Thursday at the Mövenpick Hotel in cooperation with Mubadara Group and Smileyayemen initiative. It was not only that it was Ahmed’s first time performance in Yemen, but also it was the first time that this kind of shows was being introduced to Yemen.

“We are making history here and I’m really privileged to be part of this. It’s been a great pleasure for me to work with all the people that I met in making this show and I have to say that since I came I saw nothing but beauty and hospitality,” said Ahmed Ahmed at a press conference.

Ahmed added that when he was asked to perform in Yemen, he didn’t refuse at all. Despite all the misconceptions about Yemen’s security and the warnings he got from friends, he really wanted to come because this was a historical moment, to perform stand-up comedy for the first time in Yemen and he welcomed it very much.

Perhaps Yemen was not fully accustomed to this kind of show but initiatives had to be done. Hisham al-Hashmi, Chief Executive officer at Mubadara group stated that no matter how Yemen society was not ready yet for such show, someone had to take the chance and initiate this. “We need to start. If we wait too long, we’ll be missing growth among all the other international cultural expansion.

Ahmed al-Kabab, co-founder of Smileyayemen initiative pointed out the event’s significance. “We wanted to bring Yemen’s great history, culture, kindness and hospitality into the light. It was important to present a smiling side of Yemen, midst all the false accusations about Yemen. Therefore, this was a response to terrorism accusations Yemen faces.”

The show’s core objective was to convey a different and more realistic image of Yemen, an image away from terrorism. Amidst all Yemen’s current repetition in the international news, this show presence was a factual proof that Yemen has a great sense of humor, reflected in its people welcoming reaction to holding this kind of show.

The reason behind choosing Ahmed of all other comedians was that he comes from Arabic origins has a huge audience in the west and has the needed experience. That’s to say, he was the perfect one to convey the message of changing Yemen’s image sarcastically, with more sensible approach.

“This show is just the beginning and we hope to initiate more events of this kind. We’d really like to see Yemenis themselves take lead and perform their own stand-up comedy shows,” concluded al-Kabab.