The Flaws and Failures of International Humanitarian Aid to Yemen 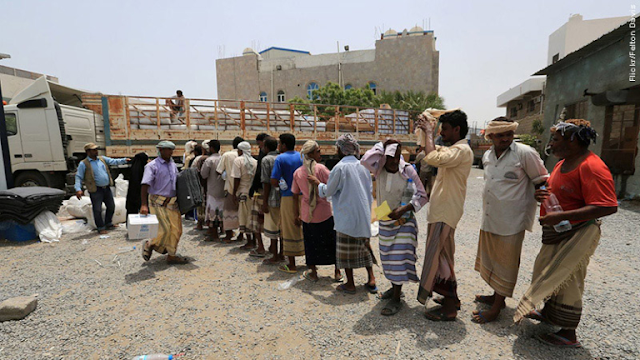 *Arab Center in Washington DC -  In a July 2022 report on the UN’s humanitarian response to the crisis in Yemen, the UN Inter-Agency Humanitarian Evaluation Steering Group concluded that “the quality of humanitarian aid in many areas was unacceptably low,” and that affected populations repeatedly said that “they did not know how to access aid, or how to get on the ‘lists’ that led to assistance.” Yemenis from all walks of life have indeed been highly critical of how international humanitarian assistance has been undertaken in Yemen. In fact, a social media campaign using the hashtag #WhereIsTheMoney has been expressing Yemenis’ frustration over the failures in implementing international humanitarian aid, questioning the quality of said aid, and demanding transparency from the UN and other international agencies regarding the methods and process for spending funds.

Moreover, a growing number of Yemen experts have for some time been sounding the alarm about the failures of the international humanitarian response in the country. Yemeni American historian Asher Orkaby, Yemeni investigative journalist Ali Salem, this author, and the Sana’a Center for Strategic Studies have all published striking critiques of the international humanitarian aid system in Yemen, and the Sana’a Center also briefed the UN Security Council about the same matter.

All of this criticism indicates that there are serious problems that the international humanitarian community needs to address in order to truly relieve human suffering in Yemen. Problems include a weak strategy that focuses on short-term solutions, counterproductive stances of neutrality and impartiality, reluctance to speak out against warring parties’ abuse of aid and humanitarian workers, and a lack of sufficient inclusion of Yemeni professionals. To address these problems, it is absolutely imperative that international organizations work to stamp out corruption, to reevaluate their strategies and practices, and to involve local partners and experts to a greater degree. Only by making these changes and by focusing on long-term solutions will these organizations be able to contribute to permanently resolving the humanitarian situation in Yemen.


The Scale of the Current Humanitarian Crisis
The loss of livelihoods due to the ongoing conflict has led millions of Yemenis to rely on humanitarian aid, which is especially significant in a country that for decades prior to the conflict had been ranked as the poorest country in the Arab world. In 2017, the UN described Yemen as the world’s worst humanitarian crisis, until Afghanistan was named in 2021 as being poised to take over that terrible title. Since the conflict began in Yemen, there have been steadily growing international humanitarian efforts, and the 2021 Global Humanitarian Assistance Report lists Yemen as the world’s second highest recipient of international humanitarian assistance. Although Yemen still has not received all of the funding that has been pledged, since 2015, billions of dollars have been delivered from international donors to fund the UN-led humanitarian response plan.


Nonetheless, the humanitarian situation remains dire. It is estimated that more than two million Yemeni children under the age of five will suffer from acute malnutrition in 2022, and that nearly 19 million people in Yemen will suffer from acute food insecurity, compared to 13.5 million in 2020. Children who suffer from severe malnutrition are at risk of ??irreversible damage to their future health and brain development, including stunted growth. Meanwhile, the number of children dropping out of school is on the rise, reaching over two million. More than eight million women and girls of childbearing age in Yemen desperately need access to reproductive health services. And a staggering number of Yemenis—between 71 and 78 percent of the country’s nearly 30 million people—now live in poverty, according to a June 2022 World Bank report.
Weak Strategy

Most international humanitarian and human rights groups working on issues related to Yemen know what they want to do, but fail to fully understand potential side effects of their work. That is to say that they are aware of their work mandate and strategy, but lack the ability to carry them out effectively without creating disadvantages for the Yemeni population.

These organizations’ strategies tend to focus on implementing their own agendas, which typically have a temporary, short-term impact, and which mainly aim to satisfy donors and meet their expectations. But for many Yemenis these strategies are irrelevant, do not address the roots of the problem, and fail to provide long-term solutions to persistent issues.


A prime example of weak humanitarian aid strategy is the World Food Program’s (WFP) practices in Yemen. In September 2022, the WFP’s country director said about the organization’s work there that it was “able to keep people from starving—to keep famine at bay.” Keeping famine “at bay,” however, is a short-term solution, one that eventually creates a situation of foreign aid dependency. When the WFP won the Nobel Peace Prize in 2020, many Yemenis were shocked, especially given the WFP’s flawed work in the country. Again and again, the WFP has been accused of letting food rot in local warehouses and of sending rotten food to Yemen, and possibly even doing so deliberately. It is possible that the tragic results of the WFP’s food assistance program are due to the extremely difficult logistics of operating in Yemen. This, however, highlights another problem: the neutrality principle.

As the conflict has continued, more armed militia groups have emerged and the war economy has flourished. In this context, international humanitarian organizations’ position of neutrality has translated into a tragic silence on armed groups’ abusive practices against humanitarian work and their obstruction of humanitarian assistance. Numerous media reports have shed light on abuses committed by the country’s warring parties against humanitarian aid. But despite even an in-depth Associated Press investigation detailing aid abuses carried out by all parties to the conflict, international humanitarian aid groups have failed to condemn these abuses.

In April 2021, after three years of working as the UN Resident Coordinator and Humanitarian Coordinator in Yemen, Lise Grande spoke out against the Houthi armed group’s violations of humanitarian aid assistance during a congressional subcommittee hearing. However, the UN’s own offices in Yemen have also been accused of major corruption.


What Yemenis need from international humanitarian aid workers while they are in their posts is the bravery that Grande demonstrated. They must name and shame armed groups that are responsible for making the humanitarian crisis worse. A potential starting point for this effort would be a condemnation of the Houthi armed group’s restrictions on women, including female humanitarian aid workers (both Yemenis and foreigners), whom the Houthis force to have a male guardian when traveling for work inside Yemen.

International organizations’ weak strategies perhaps stem from a fear of losing funding, from a commitment to doing work by the book as their donors would like them to do, or from certain elements of orientalism. Unfortunately, satisfying donors comes as a top priority on their agenda. The social media pages of many international humanitarian groups working in Yemen contain many posts thanking specific donors for their funding, as if part of their work is to respond to donors’ need for recognition.
Submission to Warlords

Because the majority of Yemen’s population lives in areas controlled by the Houthi armed group, the majority of humanitarian work in the country is done in those areas. After Houthi leaders realized that international aid could be a powerful tool, they created in 2019 a Houthi-owned humanitarian body called the Supreme Council for the Management and Coordination of Humanitarian Affairs and International Cooperation (SCMCHA). This author asked numerous civil society actors and groups, including local humanitarian aid workers, about their thoughts on SCMCHA. Almost all of those questioned had the same response: SCMCHA’s main purpose is to deliver intelligence to senior Houthi officials about independent local humanitarian aid groups, to impose hundreds of restrictions on local and international aid organizations, and to tax or otherwise deduct money from international humanitarian aid funding. SCMCHA holds a monopoly over all Yemeni humanitarian aid work in areas under Houthi control, which means that any civil society groups trying to undertake aid work must abide by Houthi authorities’ rules and requirements, and must submit to total supervision.

International humanitarian aid groups have only spoken out against SCMCHA’s violations on one occasion. In February 2020, the Associated Press reported on a dispute between the Houthis and UN agencies, which occurred after Houthi authorities demanded a tax of 2 percent on each of the UN’s humanitarian programs. As a result, international donors suspended aid to areas under Houthi control, which forced the Houthis to put their taxation plan on hold, thereby encouraging donors to resume aid.


However, Houthi authorities have found another method to make money off of humanitarian aid, namely by charging Yemenis themselves. During the month of Ramadan in 2022, for instance, Houthi authorities issued an order that has largely gone unmentioned outside of the country, and that stated that no one was allowed to donate food or aid outside of the group’s control or supervision and that doing so required a license. Because international humanitarian aid groups attempt to uphold impartiality in their work, they are very often submissive to the Houthis’ orders, which allows Houthi authorities to benefit from the aid that is meant for individuals and local organizations.
Excluding Potential Local Partners

All of these problems could be mitigated or fully solved if more Yemeni voices were involved, and if the advice these potential local partners have to give was heard. International organizations must include more Yemeni humanitarian aid workers in the efforts in Yemen. Yemenis, who have extensive local knowledge and an ear to the ground, are best able to identify the needs of their communities and to suggest possible solutions. Yemeni humanitarian professionals can promote the best possible tactics and strategies to both incentivize and pressure the Houthis and other armed groups to change their behavior.

After eight years of conflict, the humanitarian crisis in Yemen is no longer an emergency situation, but rather has transformed into a dire and long-lasting humanitarian situation, creating a complex war economy that is proving all but impossible to dismantle. If the international humanitarian community truly aims to relieve human suffering, it is imperative that it take a comprehensive view and work to design strategies that provide long-term solutions and address both everyday needs and the roots of diverse problems.

*This policy analysis piece was written by Afrah Nasser for the Arab Center, and it was published on AC's website on October 20, click here to view the original version.