War and COVID-19 in Yemen 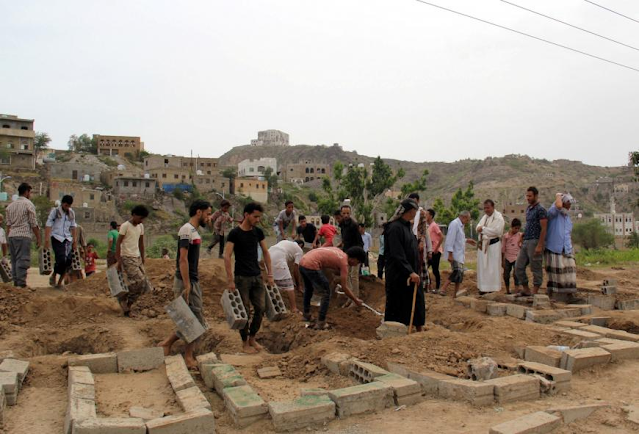 After Yemen’s 2011 uprising broke out, the country went through a series of political upheavals and cycles of violence that tore the country apart, including the start of a full-scale civil war in 2014 and the Saudi- and UAE-led intervention in 2015.

In a context where civilians have been deliberately attacked by all sides, COVID-19 has added a new layer to the unspeakable suffering for millions of civilians in Yemen, whilst Europe has reacted with development aid but has thus far failed to support need for accountability in the conflict.

Along with the US, the UK, France and other Western states have continued to sell weapons to the Saudis and other coalition members. Hadi fled to Saudi Arabia in 2015. Saudi Arabia said it was acting in defence of Yemen’s legitimate government. Six years on, the coalition has not achieved its goal of restoring Hadi to power.

Meanwhile, the Houthi armed group has consolidated its hold on Sanaa and much of the northern highlands, particularly after Houthi forces assassinated their previous ally, former president Saleh, in December 2017.

Today, there are more than 30 fronts across Yemen involving fighting by various domestic armed groups, in addition to the coalition’s airstrikes. Both sides to the conflict have been responsible for unlawful attacks that harmed civilians, many of them carried out with disregard for civilian life, and that may amount to war crimes.

Saudi Arabia claimed in 2015 that its military operation would be “limited in nature, and designed to protect the people [of Yemen]”. But the Yemeni group Mwatana has reported that almost a third of all airstrikes carried out by the coalition hit civilian sites such as homes, hospitals, schools, weddings, farms, food stores and water wells, killing and wounding more than 18,400 civilians and counting. The actual numbers of civilian casualties is most likely higher because data collection has been extremely difficult.

The Saudi-led coalition is not the only party responsible for civilian deaths and injuries. Houthi forces have used banned antipersonnel landmines in many parts of Yemen, fired artillery indiscriminately into cities such as Taizz and Hodeidah, killing and wounding civilians, assassinated dissidents and launched indiscriminate ballistic missiles at civilian infrastructure in Saudi Arabia.

There are no clear estimates of the number of civilian casualties from Houthi attacks because, again, data collection has been extremely difficult. Killings and other abuses committed by Houthi forces may also constitute war crimes.

As the Yemeni civilian population is already suffering in an enormous man-made humanitarian crisis, the COVID-19 crisis has added a new stress to a health system which has already been shattered by war. Under-resourced and buffeted by years of conflict, it is inadequately prepared to care for COVID-19 patients and contain the spread of the virus. Nonetheless, the pandemic has been only one of Yemenis’ many health concerns.

Prior to COVID-19, several other notable disease outbreaks including cholera, diphtheria, measles and dengue fever were reported in Yemen. Cholera alone has affected nearly every Yemeni family in some way, with almost two million suspected cases since 2016.

Yet, more than half of Yemen’s health facilities are closed or partially functioning. Since 2015, parties to the conflict have targeted not only medical facilities but also medical personnel, as health workers have been threatened, injured, abducted, detained and killed.

Consequently, many medical professionals have fled Yemen, further damaging the healthcare response. The Houthis have severely hampered and diverted international aid in areas under their control. Parties to the conflict have also possibly used starvation as a weapon of war, further weakening Yemenis’ health. In 2017, the UN humanitarian chief Stephen O’Brien called Yemen the greatest humanitarian crisis since the end of World War II.

In light of these serial abuses, the pandemic adds a new layer of misery for Yemenis whose mental and physical health and access to healthcare infrastructure has already been severely depleted. The country’s first confirmed case were recorded on 10 April 2020.

Despite that the country’s limited testing capacity, as of 26 September the number of confirmed cases in Yemen had reached 2,034, with 588 associated deaths. It is impossible to know the actual numbers.

The Houthi authorities in Yemen’s north were accused of hiding the real impact of COVID-19 in areas under their control. UN officials have raised concerns that the coronavirus could infect nearly 16 million people in Yemen, 55 per cent of the population, based on epidemiological projections.

Saudi Arabia announced in April that the coalition would begin a unilateral ceasefire following the call by UN Secretary-General António Guterres in March for a global ceasefire to advance peace and combat the pandemic. Many humanitarian and human rights groups welcomed the move and thought there was a window to begin a process to end the suffering of millions of civilians in Yemen. Hostilities nonetheless continued.

The Urgent Need for Accountability

While the European Union continues its humanitarian aid to Yemen, €484 million since 2015, it has made limited efforts to suspend arms sales to the coalition, despite a legally binding EU Common Position stating that arms exports to countries that “use the military technology or equipment [...] aggressively against another country" should not be granted an export license.

Following the Saudi government’s killing of Jamal Khashoggi in 2018, the European Parliament passed resolutions calling for an EU arms embargo against Saudi Arabia. It also urged EU member states not to sell arms to Saudi Arabia, the UAE “and any member of the international coalition”, or to the government of Yemen and other parties.

While some EU states have halted or restricted exports of military equipment to the coalition – due to international humanitarian law and human rights concerns – others have continued with supplies. US State Department officials have warned that US officials could risk war crimes for continuing to approve arms sales, given the Saudi-led coalition’s pattern of unlawful attacks in Yemen over the course of years.

In December 2019, the European Centre for Constitutional and Human Rights, supported by five nongovernmental groups, urged the International Criminal Court (ICC) prosecutor to investigate the role of executives of European arms companies and licensing officials in violation of international humanitarian law that could amount to war crimes in Yemen.

The following month, the UK announced that it would resume arms sales to Saudi Arabia despite documented evidence of continuing laws-of-war violations by the coalition. The same goes for other states, including the US, France, Canada and Spain. Saudi Arabia and the UAE are the two largest customers of the European arms industry.

The atrocities committed cannot be swept under the rug, but the unwillingness of states involved in the conflict to acknowledge the gross human rights abuses and international humanitarian violations committed in Yemen makes it difficult to believe that the victims will one day find justice and redress.

As most of the world is preoccupied with the pandemic in their own countries, the disastrous humanitarian situation in Yemen has received even less attention. However, the work of local and international human rights groups remains robust and vital – sending a message to not give up – providing lifesaving support to Yemen’s suffering population while documenting abuses and violations that will prove vital for any form of accountability and reconciliation in the war torn country.
_______________________________________________
This article was first published in Istituto Affari Internazionali