*The past year has been agony for a group of war-wounded Yemeni soldiers. As part of national medical and financial assistance to wounded soldiers, many were flown out to Egypt to receive treatment. Most ended up stranded as financial assistance quickly dried up for the soldiers, including those interviewed, among others. Unable to leave due to the severity of their injuries and lack of funds, soldiers describe being forgotten by the government they fought for. Due to ongoing economic strains and instability in Yemen, wounded soldiers are not a priority for the current government as it is logistically and financially unable to meet its prior obligations to its soldiers.

Sami, 25, is one of a group of soldiers living in a shared apartment in Cairo. He came to Egypt several months ago after receiving initial medical care financed by the Yemeni government. In the shared apartment, he sits on a sofa, wearing dark sunglasses to cover his injuries. A bullet hit him across his eyes while fighting in Taiz, months ago. He lost both his eyes and the ability to taste and smell because he didn’t receive sufficient urgent medical care. I was told Sami is an only child and his mother doesn’t know the extent of his injuries.

Like many of the soldiers, once he finds out I am a journalist here to interview them all, he quickly stands up to leave and forces his friend to leave as well. He walks out of the room and says bitterly, “I don’t want to be interviewed.”

Sami—not his real name—like all the other injured Yemeni soldiers in that apartment were part of armed forces in the national army under the authority of exiled President Abdrabbo Mansour Hadi. Soldiers are promised medical care at the expense of the national army from on duty injuries. Health facilities in Yemen are collapsing, and soldiers are flown overseas to be treated. 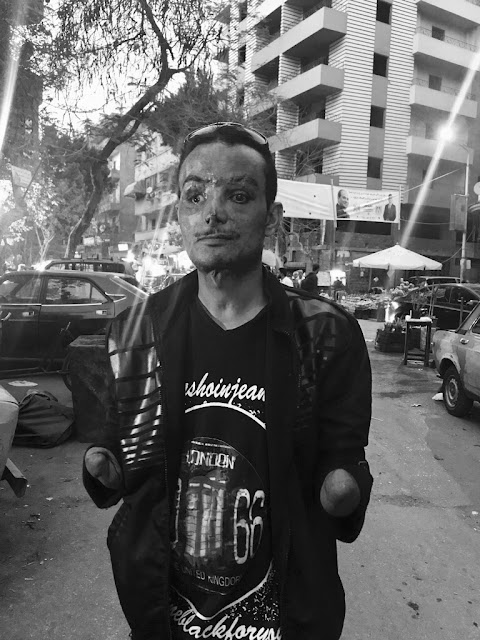 Taiz has been the site of bloody fighting since 2015 between national army forces under the control of the government of President Hadi and national resistance group forces affiliated with the Yemeni government; and the Houthis. There is no comprehensive data of military casualties or injured Yemeni soldiers, however, Doctors Without Borders or Médecins Sans Frontières (MSF) reports that since March 2015, “MSF has treated more than 72,000 patients wounded by violence in our medical facilities and MSF-supported clinics.”

The soldiers say they have been forgotten, despite promises from the Yemeni government to provide them with ongoing medical and financial assistance. “My wounds are rotting while Yemeni officials refuse to answer my calls,” says Khatab Al-Ruaiani, 28, a soldier wounded twice at the battlefield in Taiz, in his back and his thigh. “I joined the army because I wanted to serve my country and I never imagined that my country would forget me like this.”

Interrupting Al-Ruaiani, the 25-years-old Emad Al-Fagieh explains, “we are slowly dying from the pain of our injuries without any relief (medical or financial).” Al-Fagieh suffers from serious injuries in his face and the loss of both his arms and his left eye due to a mine explosion while fighting. “There are urgent medical operations that we need to have, not only to survive, but also to go back to how we were before.”

Under the Yemeni government, soldiers with war injuries are classified into three categories: 1) Sahel soldiers that fight on the coastal line from al-Khawkhah to Aden, 2) Marib province soldiers and 3) Taiz city soldiers. The Sahel soldiers are usually medically treated in the UAE and the latter two groups in India or Egypt. Most wounded soldiers are left untreated. These soldiers managed to receive medical care from individual donations through social media posts by relatives or friends on their behalf. 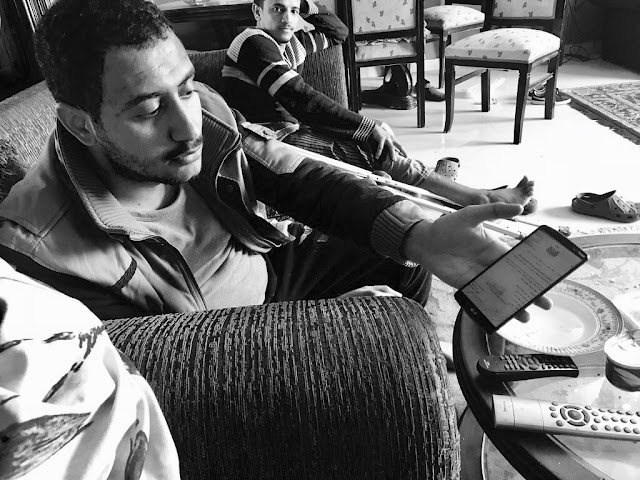 If it wasn’t for an anonymous female philanthropist and her donation, Mohammed Dabwan, 22, wouldn’t be able to come to Egypt. Dabwan suffers from an injury in his back and belly that caused him bladder and bowel dysfunction. “I am registered in the armed forces’ list of whom they promised to cover medical expenses for while in Egypt, and yet it was the individual donor who covered my flight to Egypt,” explains Dabwan, while showing me in his mobile his name in the armed forces’ list. Dabwan believes he sacrificed a lot for Taiz and was not taken care of by the government in return. He has no other skillset except in fighting and sees no other future for himself except to go back to Taiz and fight.

Last year, the Yemeni embassy in Cairo hosted a music concert for two Yemeni singers, Ahmed Fathi and his daughter, Balqees Fathi, raising funds for cholera victims in Yemen—some wounded soldiers tried to use the event to cast a spotlight on the neglect they are facing. “We tried to protest at the concert, but we were forced by security to leave,” recalls Al-Ruaiani.

“Our message is not for the embassy, it is rather to President Hadi himself to intervene and end this slow death we are going through,” says Hamdi Najib, 27, with severe arm and thigh injures. Najib has been in Egypt for a year and a half undergoing several surgeries totaling $5,000, “I’m indebted and penniless; and I still need more surgeries—our government has to be held accountable.” 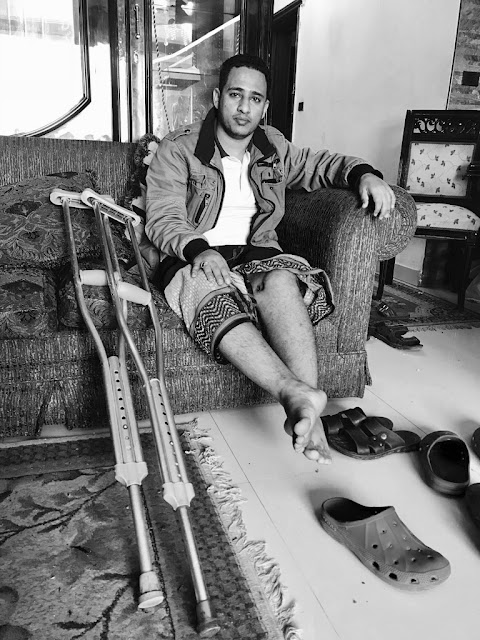 The Yemeni embassy established a medical committee assigned to handle soldiers’ medical issues—its head, Khaled Al-Sama’ai explains on a phone interview that Yemeni state workers have not received their salaries for about two years and that has negatively impacted financial support for wounded soldiers. “Presidential authorizations to transfer funds to the wounded soldiers often takes some time, but we are doing our best to address the soldiers’ cases,” says Al-Sama’ai. When asked why soldiers from Taiz believe they are more neglected than soldiers from other areas, Al-Sama’ai refused to give a clear answer except that, “it might be politically motivated—I can’t reveal much.”

Despite the poor medical care and financial assistance from the Yemeni government in Egypt, all of the soldiers interviewed prefer to stay. The poor quality and basic medical facilities in Yemen are ill-equipped to deal with their injuries long term and to return would mean being cut off from charitable donors and organizations sustaining them in Egypt. They have a long and slow journey to heal as they gather what medical and financial assistance they can while they question the government they fought for, but with little choice except to continue to fighting for them once they recover.