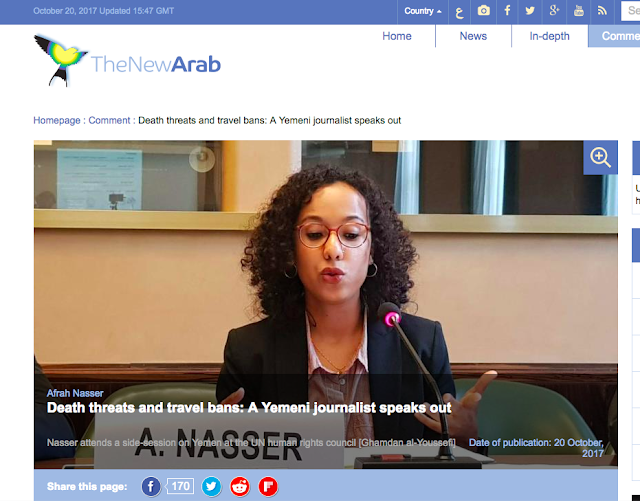 When the Committee to Protect Journalists announced two months ago that I was one of the awardees of this year's International Free Press Award (IFPA), I knew I was about to undertake a bittersweet step in my almost decade-long journalism career.

The CPJ explained that, from the Arab region, they had chosen Yemen this year, in order to shine a light on the conditions in which Yemeni journalists work, and also to celebrate my reporting on Yemen, despite all the obstacles.

But in the age of US President Donald Trump's travel ban - which includes Yemeni nationals - I became increasingly concerned about travelling to the US to receive the award.

In addition to an invitation to the awards ceremony in New York, the CPJ have also organised for me to meet with State Department officials in DC, and university staff to raise awareness about violations against Yemeni journalists and the humanitarian crisis in my war-torn homeland.

While there are good reasons why I should travel to the US and join the CPJ, my two US visa applications to date have been rejected by the American embassy in Stockholm, Sweden. I am currently applying for the third time, and I am not optimistic.

Sweden became my second home after I arrived here in May 2011 from Yemen, after being invited to participate in a youth leadership training course. I left with just two weeks of luggage, thinking I'd soon be back home.

Not wanting to wake my mother before my late-night flight, I left without much of a goodbye. But as the violence escalated in my hometown, Sanaa, and I was at risk following the death threats I was receiving for my anti-regime writings during the beginning of Yemen's 2011 uprising, Sweden became the place where I had to seek political asylum.

As the conflict in Yemen continued, I remained in Sweden and continued freelance reporting on Yemen for various media outlets. In a bid to stay in contact with my family and friends in Yemen, and the diaspora abroad, I've used every channel of communication I can.

For the past six years in Sweden, I have been on constant alert, hunting my next Yemen story. While I could have put Yemen to the back of my mind, and settled down in Sweden, continuing to write felt like the most meaningful thing I could do.

Determined to expose the under-reported war in Yemen, I found that reporting from exile resembled being in a long-distant relationship, with all the love and longing that comes with geographical separation.

A year and a half year ago, I became a Swedish citizen. I could travel freely and was also enjoying living by choice in Sweden. Today, I am both Swedish and Yemeni citizen, though my Yemeni passport expired a while ago.

This makes me a privileged Yemeni in comparison to my fellow countrymen, and especially my journalist colleagues who are all trapped in war.

My Swedish passport enabled me to travel around for work until Trump's travel ban came into the picture. The proposed travel ban has gone through various iterations, but what I know for sure is that my visa applications to the US embassy in Stockholm were rejected because of it.

The first time, applying as a Swedish citizen, "you are not authorized to enter the US" was the response that came. My second application was made as a Yemeni citizen. After I made it to the interview with the embassy officer, she told me that I had failed to show my ties to Sweden and that there was no guarantee that I would return to the "foreign country" - that is Sweden - after my visit to the US.


In both applications, I was asked if I had been in Yemen anytime from March 2011 (that's when the executive order comes into effect). Of course, I had been. The application asked me to justify my visit to Yemen and I told the truth: I had a life in Yemen - family, friends and work.

I will find out by Monday if my third application has been successful. In the meantime, I want my story to help raise the profile of other Yemeni journalists, working hard to make the world understand the brutal suffering of a nation.