I wish the world can know the matter of Yemeni journos is a matter that reflects the suffering Yemeni nation as a whole endures. And It's a justice matter! 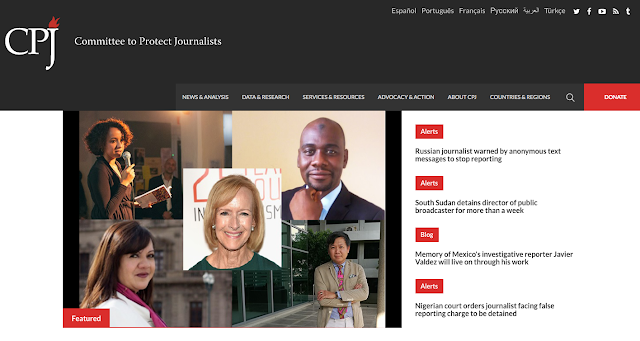 I’m so grateful for all the love and congratulating words I’ve been receiving today. My mobile feels going to explode with the messages, notifications and calls. I’m in awe with all your love. Thank you! Thank you! And thank you to Sherif and everyone at the Committee to Protect Journalists! I’m humbled to get noticed by such an organisation that I respect so much, let alone to get awarded by you. CPJ is an organisation I grew up learning so much about press freedom from and I’m humbled to get this recognition for my humble and imperfect work.

The award goes not only for me but also for all Yemeni journalists/writers who face massive dangers just for the sake of speaking up, reporting and writing. My story and struggle in doing something I love to do: journalism, is a story of a whole nation and particularly a story of many Yemeni journalists. And I cherish each journalist’s struggle.

During my college years at Sana'a University in Sana’a, one time, my teacher asked me about what do I want to be after I graduate. I said: I want to become a writer. He replied: you'll die poor & unread - and nobody will know about you. How much was he wrong, right?

As a female, you are expected not to dream big and have not many ambitions. As a woman writer, you are expected to focus on writing only “soft topics” and avoid the hard topics. I didn't buy all of that. I thought the sky was the limit. And my gender should never matter.

I have been writing since I was 15 years old in my journals. I have been writing for newspapers since I was 20. Now, I look back and I see that I’ve been writing more than the half of my life. In late 2008, I started journalism professionally. I was overjoyed to be paid for something I adore to do. When Yemen’s 2011 uprising happened, I felt an urge to tell the world about the bravery of my people. I also thought there was a problem: not many native Yemeni journalists write in English about Yemen. I wanted to have a megaphone to the world. So I created a blog.

I had Zero expectation that anyone would read the blog. In fact, till today, there are moments when I think, how the heck all this happened with this blog! Even though I thought no one would read the blog, I had an urge to tell stories. Stories were bursting out of my chest. I needed to tell the world about my people's stories. So I kept on blogging.

What I know today is that no change has ever happened without free press & freedom of expression. It’s the fundamental tool that any community needs to make a change - to express it first freely. And I know that my Yemeni generation needed change and free press, and so did I. So far I've blogged more than 1,000 blog posts and freelanced for dozen places. I bleed stories. Yemeni stories. I know also, No Yemeni has ever written enough. No Yemeni has ever written enough. Let alone of Yemeni women writers.

I wish the world can know, the matter of Yemeni journos is a matter that reflects the suffering Yemeni nation as a whole endures. And It's a justice matter. Period.