Thank you, Casa Arabe for the invitation! It’s my first time to be in Spain and I am very pleased to be here. In a time, Yemen is not getting sufficient attention in the media and international platforms, today’s event revives some hope for me that there is still a sense of international solidarity or at least an interest to know about the grave tragedy unfolding in Yemen.

I was asked to present an outlook on Yemeni women’s political engagement starting from Yemen’s 2011 uprising to the course of the ongoing multi-fronts Yemen war in about 10 minutes or so, which would be impossible to do. So, I will try to narrow down the outlook and explore Yemeni women’s position in politics briefly within three phases: before, during and after the uprising. The uprising that I personally owe so much to in establishing my own political awareness and activism. As a Yemeni working as a journalist since late 2008, I don’t believe in objective journalism anymore. I rather believe in reflective journalism, in which a journalist aims to challenge and question power. And as a woman, I would be lying if I say that I am not biased to women - so you are listening to the perspective of a feminist and reflective Yemeni journalist. This is very crucial to stress on at the beginning because the polarisation in Yemen war compels you to identify your position in any Yemen-related political debate. Many say if you are pro this it means you are against that and vice versa. For me, I am anti-war mainly because war is a gender issue - women tend to be the first victims of wars and my fellow women are bearing the greatest burden of the war. With that said, I am not dismissing the many powerful survivor and hero women we have. Also, I define myself as anti-violence committed by all warring sides; because I refuse to be biased. All sides are evil butchering Yemeni lives with impunity and these atrocities must be condemned from all and anyone.

Now, In order to explore the situation of Yemeni women, I prepared this slide show of few photos that could illustrate few aspects. 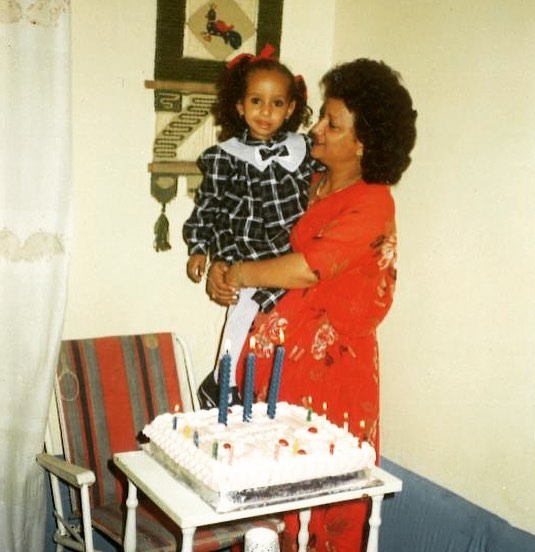 Despite that the two Yemens, you know the north and the south, were the first countries in the Arabian Peninsula to issue a comprehensive marriage law, gender justice was a battleground for many decades in Yemen. As time is limited, I can only say that by 1992 a joint Personal Status law was established which not only mixed local custom with Sharia but it also left marriage laws change in time echoing the general political debates. This greatly undermined women’s rights. A well-known example of this can be seen in the child marriage issue in Yemen.


While more than half of Yemen’s female population are married off before they reach 18, and while Yemen’s female population endures one of the highest maternal mortality rates in the world, as they are often mothers at age of 9 or 10 or 13, both institutionalised system and devastating economic situation allow this practice to expand. Women’s rights campaigners have exerted great effort to legally ban child marriage. Here is a picture from a protest in front of Yemen’s parliament in Sana’a in 2010 calling for the ban.


Next day, Yemen's Islamist party, the Islah party mobilised its women to hold a counter-protest to the previous one, basically to support child marriage. 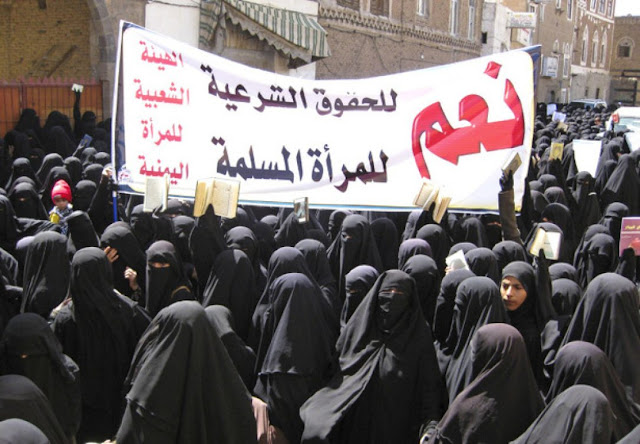 When the revolution came, women were the ones leading the uprising in 2011. Nobel laureate Tawakkol Karman is the most well-known example. Also, the uprising represented an opportunity for female opinion leaders, activists, writers and intellectuals to challenge the social construction that was boxing and demeaning them. 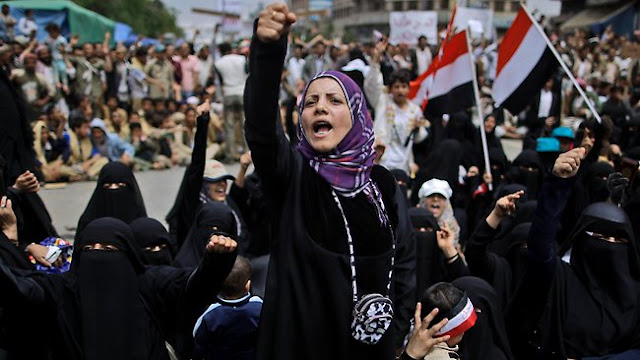 Unfortunately, women were used also as a decorative tool by different male-dominated political parties in the uprising. Beyond that superficial role, they were not welcome. Only one protest defied that manipulative usage, as it tried embracing a conscious feminist vision, but it had an unfortunate end. It was April 2011. A group of women activists wanted to make a feminist and political statement in response to ousted president Ali Abdullah Saleh’s decree condemning the mixing of the sexes in the protests. The female protesters and their male supporters marched together and were attacked right there in the street by men affiliated with General Ali Mohsin, the powerful army man who held power at the time. The Lesson learned from that incident is that in Yemen Men’s political power was larger than women’s feminist power.

When the political transition process began in 2013, women fought for and won a quota of 30 percent representation in the National Dialogue Conference. But with the Houthi takeover in September 2014, the transitional process has taken a violent turn, and in the attempts to launch a peace process, the need for women’s participation in negotiations was hardly mentioned. At that time, when the different factions were approached by female political activists, the parties used to say that, “it’s not a priority now to include women; …. once peace prevails women might join,” — as if women’s role was secondary.

As the Saudi-led coalition began its military operation in March 2015, that was also the starting point for not only worsening the already fragile humanitarian situation in Yemen but also the collapse of any existing semi-political process. Today, after about 2 years and half of multi-fronts armed confrontations across the country, Yemenis are being trapped and starved into death. Today, the largest humanitarian crisis in the world is in Yemen - even beyond Syria or anywhere else. According to UN reports, more than 10 thousands people have been killed and I am certain that the death toll is higher as generally if the bullets won’t kill you, the famine, and the almost totally paralyzed healthcare system and the spread of diseases like Cholera will kill you. About 17 million people are barely surviving as they are one step into famine. Total famine is not declared yet, but the UN humanitarian chief said two weeks ago that Yemen is facing "total social, economic and institutional collapse". And I quote him, "The people of Yemen are being subjected to deprivation, disease and death as the world watches. Crisis is not coming, it is not looming, it is here today - on our watch," end of quote. And I stress on the fact that women bear the greatest burden of war. Two weeks ago, a lady in Ibb city in Yemen poisoned herself and two daughters and committed suicide as the mother had nothing and could not go begging for help. 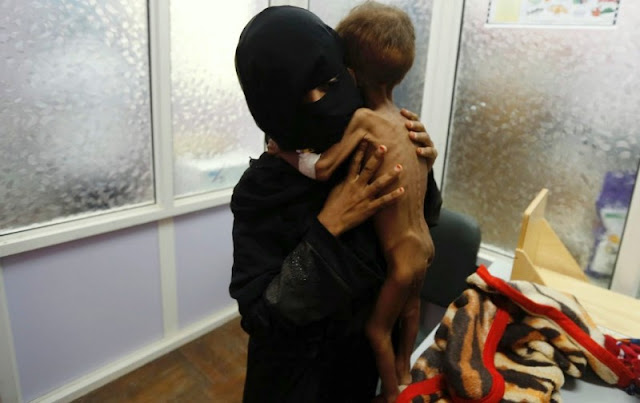 Not to forget that child marriage among little girls is increasing rapidly as a result of the economic devastation and the increasing rate of displacement. A week ago, I called my family in Sana’a, and I was told that one of my old friend’s husband just had a second wife whose only 15 years old. It would be no exaggeration in saying that this war has affected every single household in Yemen.

Midst of all this tragic situation, I would like to share some of the political manifestations done by women.

In this picture you can see a lady is about to bike. As the war began in 2015, in Sana’a, a young activist, Bushra al Fusail led a group of women to bike to defy the fuel shortages, and the Saudi-led airstrikes and gender stereotypes.

In the other picture you can see that women taking up arms to fight. This picture was taken in Taiz and normally they are fighting the Houthis. Then, also in Sana’a, the Houthis have organized women marches with their weapons. So Pro-Houthi women too have been mobilized in supporting what’s called “the military effort” المجهود الحربي through donating money or sending food to the frontlines at the battlefield and so on. 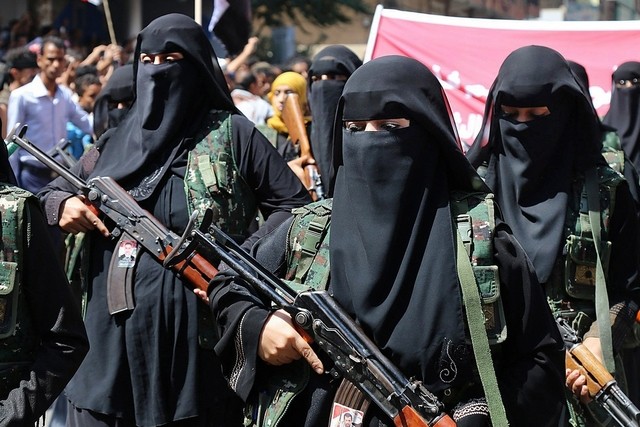 Also, in response to the zero representation of women in Yemen’s several peace talks, Women’s Pact for Peace and Security was established by a group of Yemeni politicians and activists, a body that is endorsed by the UN women. Here in the picture you can see one of my blog posts, being cynical to the zero representation of women in the peace talks. “Yemen’s Peace Talks! Congrats, you have an all-male panel!” 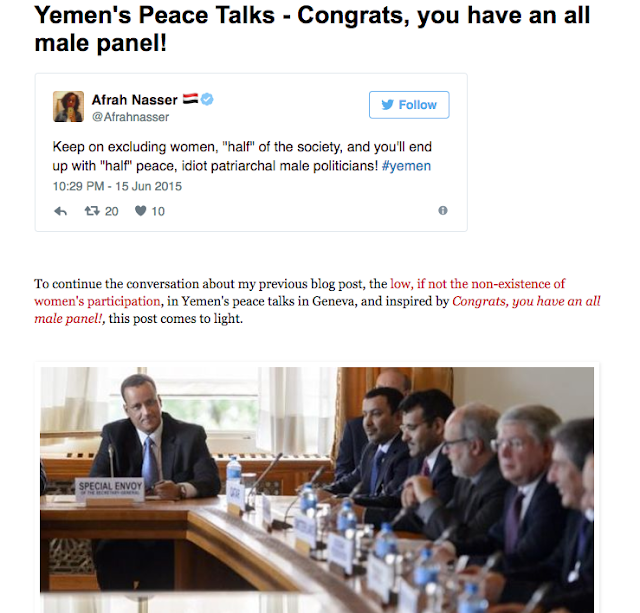 Also, as massive numbers of forcibly disappeared young men from activists, journalists and other have been detained or abducted by Houthi men and other extremist groups in different parts of Yemen, the female relatives of these men; whether their mothers, sisters or daughters came together to establish a sort of an association called, ‘Mothers of the detainees’. I find it one of the remarkable grassroot groups in Yemen. Make sure to follow them on twitter.

As I am heavily engaged in media, it concerns me very much the condition of freedom of expression. Yemeni press is under heavy crackdown primarily by the rebels group, the Houthi and also other extremist militia groups and this not to dismiss that there is a great deal of media blackout on Yemen war as Saudi Arabia has bought many media houses and international PR companies. In this atmosphere of no space for free expression, women experience the crackdown in two dimensions; one because of the general status quo and second just because they are females. So, in the Yemeni public debate, some women opinion leaders are targeted and intimidated just because they are females. And I find it very problematic the misogyny used in images to demean male politicians. This is even seen globally. It is absolutely disturbing to me as a female. 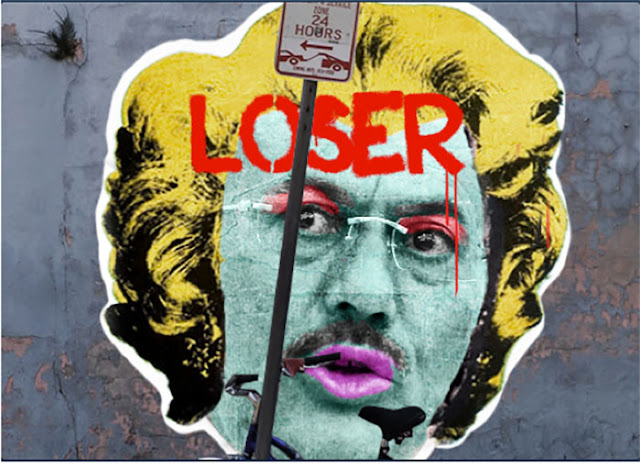 Now, just to conclude, I think what’s very relevant for you to know is that we can’t talk about women’s issues without talking about militarism which Spain has a huge role in. In Yemen war, there have been massive war crimes; hospitals, mosques, weddings, schools, funerals and other non-combatant civilians’ areas have been all targeted. Human rights groups have reported last year that One in three Saudi air raids on Yemen hit civilian sites. And despite all these reports Westernrn governments, including countries from the European Union have been some of the top suppliers of weapons to the Saudi-led coalition members. And My message here would be: enough with double-standards from EU countries. Enough with preaching about Human rights and at the same time collaborating with states that are committing atrocities with a European-made weapon. This can only be reverted by you, the EU citizens; through one being better informed about the atrocities committed by say, Spanish-made weapon, or Uk-made weapon, and etc. And two by you questioning your government and politicians; at least ask: can we investigate how our weapon is being used? Is it used in a way that violates international human rights laws?

The tragedy in Yemen; it’s not a natural disaster. It’s a man-made tragedy. And us, the mankind can affirm our humanity and work together to end this tragedy. And in this Yemenis need your solidarity, now.  And thank you!