*The media landscape is changing and re-shaping constantly with the internet in our midst. Internet is a platform for publishing and broadcasting not only for journalists but also for citizens (and netiznes). Because everyone is communicating online including the citizen journalists, the need for professional journalists has become acute and sought after. Sought especially by the independent and mainstream media in order to find and narrate stories that matter to the people in a compelling manner, and in the professional fashion that includes ethics and codes of conduct.

Afrah Nasser is also a human rights activist and strives to report on unreported aspects of her home-country Yemen (the poorest Arab country in the Middle East, and almost unnoticed by the Western media except briefly during the Arab Spring, and now the Guardian reports 'US Military members could be prosecuted for war crimes in Yemen'). Before seeking refuge in Sweden, she worked as a journalist in Sana’a where she faced in-house censorships on political reporting. 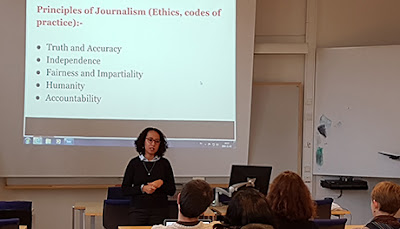 In a 2-hour session, Afrah Nasser focused on how ‘citizen journalism is shaping professional journalism’ by mentioning to the student-journalists from her experiences on Twitter and blogging. She is an alumnus of JMG, and did a thesis under Jenny Wiik the course director of Master’s in Investigative Journalism. From her experiences as reporter in Yemen to working in Sweden as a journalist, she explained the role of political regimes in the Middle East by mentioning Bahrain, Oman, Qatar, Syria, Lebanon, Saudi Arabia and what the West can do, and cannot do for the betterment of civic and political freedoms.

In the era of ‘slow journalism’ and ‘fast journalism’ how to come to terms with finding a story and bringing it to the attention of audience?

‘Journalism is a literature in hurry’ and also there are platforms such as Twitter where not only words even ‘space between words and a punctuation mark count as a character’: the size of text or word count is becoming shorter and shorter, then how can one express a complex story in crisply condensed format? For Afrah Nasser, telling a story in few words and often in hurry is an art in itself. It is something that the journalists have to live with, and find ways for expressing. 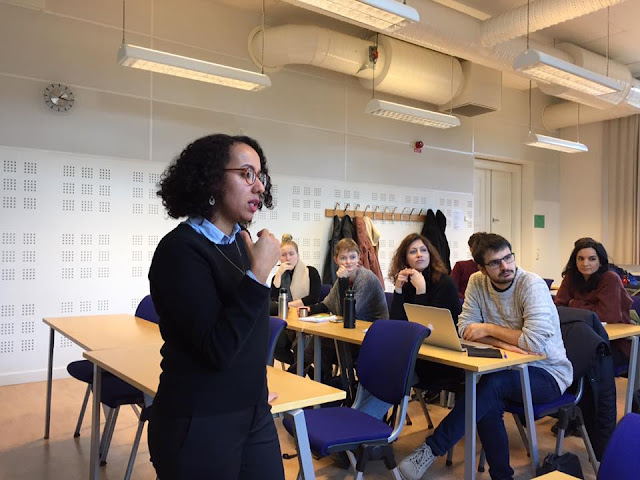 Internet is bane and boon to the society. For Afrah, it is a boon because it is a platform for citizens in dictatorial regimes to report on censored subjects. She highlighted how internet’s social media websites have becomes source of news for journalists and for users to interact (like, dislike and comment). In spite of the rise in citizen journalism, she stressed that the professional journalists stand out from the crowds because they know (ought to know) the ethics, codes of practice of the craft: truth and accuracy (verification and validation), independence, fairness and impartiality, humanity and accountability. She advised the student-journalists to empower themselves by learning the professional codes and techniques of the craft as there are a range of tools (to record, film, photograph and publish and broadcast to bypass filters and censorships) at the disposal of journalists.

Everything starts with an idea: so is the case for investigative journalists, Afrah Nasser said. She said the students of Master’s in Investigative Journalism have the potential to make an impact with their stories not only in Sweden, in Nordic countries and in Europe but also in other parts of the world.

Irrespective of citizen journalism, and the infinite content produced on the internet, she said there is always a need for professional journalists: “I am always hopeful for the future when it comes to journalism because I think as long as we have human beings…they are vibrant, and living…there will always be stories to tell and it’s the role of the journalists to tell those stories.”