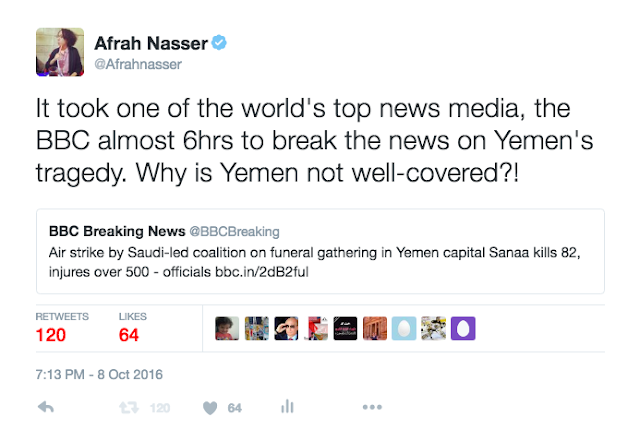 In my fury & frustration to the slow coverage to the atrocities in Yemen, I tweeted this a couple days ago. Usually, my mobile doesn't stop receiving notifications when a natural disaster or a terrorist attack happen anywhere in the world, but the day the funeral hall was hit, my mobile was silent. It's not like a notification about Yemen could solve the problem but it tells you about the indifference to Yemenis' lives by big mainstream media.

I was angry. When I am angry, it usually means I am right. I objected with a tweet. Then, I slid into a minor depression. But when you are a Yemeni under war, and politically concerned, means you're juggling anger with pain. And when you process the idea that your family and loved ones are the potential targets of the next airstrike which doesn't differentiate between a civilian or military target, you know that depression is a luxury you can't afford. I brushed my depression away and spoke out, even louder.

Just yesterday, I had three radio interviews run in the US. I did not only speak out of the Sana'a funeral hall attack, which my mother in Sana'a lost three of her colleagues at, but of all Yemenis. Yemenis' blood in Sana'a, Taiz, Houdaidah, Aden, and everywhere in Yemen do matter. We lost more than 10 thousand people in this war so far.

You can listen to one interview here and the second here. In the meantime, Yemenis don't need mere condemnation statements, they need action; they need the world's solidarity! Tweet, facebook, write petitions to your politicians, your government representatives, your international aid charity org, Write to them! Tell them, what about Yemen? why is our weapon used there? why are Yemenis dying of hunger in the 21st century? you, in Sweden, UK, USA, Germany, etc... you have the power to contribute in bringing peace!