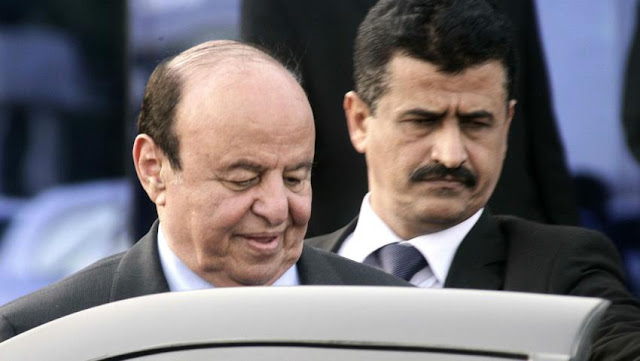 Headlines on the critical state of Yemen's current affairs highlight the catastrophic humanitarian situation, war atrocities and the precarious upcoming peace talks. But there is another calamity brewing in Yemen that is receiving little attention: the unreliable leadership of President Abd Rabbuh Mansur Hadi.

Hadi's latest New York Times op-ed, and his cabinet reshuffle both demonstrate that his own survival comes first on his agenda, overlooking the importance of winning the hearts and minds of the Yemeni public.

The fact that he appears more concerned with speaking to the west, only pausing to address Yemeni politics for his own survival interest, is weakening his status domestically. Hadi needs to rethink his leadership style and expand his public diplomacy to include both domestic and international audiences.

Inevitably, after spending 17 years in office as the vice president of ousted President Ali Abdullah Saleh, Hadi has learned about the politics of staying in office from Saleh who for the past 38 years has masterfully engineered his own survival.

For Hadi, though, the tactics he is employing are proving problematic. While Saleh used to preach that ruling Yemen was "like dancing on the heads of snakes", Hadi seems to have adopted the idea that ruling Yemen can be achieved through publishing op-eds in western media, for western audiences.

The two op-ed pieces were written by Hadi for The New York Times in April 2015 and March 2016 on the conflict in Yemen were meant to polish his image exclusively on the international stage. Clearly, these addresses were not intended to speak to the people of Yemen, where more than half the population is illiterate, let alone able to read English.

This is not to say that he does not address the Yemeni press. Hadi's texts in Arabic for local press have mostly been about his decrees; no intellectual messages are ever expressed to the hearts and minds of Yemeni citizens. In addition, Saleh's television appearances and public speeches addressing the Yemeni public outnumber Hadi's television appearances. The few interviews or televised speeches made by Hadi were done so through foreign media channels such as the Saudi-owned Al-Arabiya.

Unsurprisingly, nearly all operating TV channels inside Yemen are affiliated to Saleh and/or the Houthis, as other media offices have been attacked and shut down.

Nonetheless, Hadi has made no effort to address the locals in Yemen with anything more creative than a few Facebook statements. In choosing to emphasise addresses to western audiences rather than Yemeni citizens, Hadi has missed the point: successful public diplomacy must start at home.

Turning the tables for survival

Hadi's time in office - which was only supposed to last two years but has now lasted four - has seen constant cabinet reshuffles. This, in addition to his most recent shake-up, demonstrates his wavering efforts as a leader to continually adapt to a changing situation.

Just one week before the scheduled ceasefire on April 10, Hadi sacked Khaled Bahah, a well-respected technocrat who had a relatively peaceful connection to the Houthis and who served as both vice president and prime minister. Hadi gave away the positions to two key figures who had formerly been key hardliner members in Saleh's circle: General Ali Mohsen al-Ahmar and Ahmed bin Dagher.

This has been seen as a very problematic move in the context of efforts to hold peace talks, and US Secretary of State John Kerry has reportedly stated that President Hadi has significantly complicated efforts for peace negotiations.

Hadi's actions are simply serving to fuel the fire. Al-Ahmar, who used to be Saleh's right-hand man, not only turned the tables against Saleh in 2011 by joining the uprising, but he is also believed to have plotted the assassination attempt against Saleh in June 2011.


Reminiscent of Saleh's survival politics that saw him once again become an ally to his former enemies the Houthis, Hadi today is establishing his new allies and turning the tables against Saleh and his clan. Despite Hadi's attempts at survival, his popularity is heading for a dramatic downturn.

Reports on opposing groups reflect the growing discontent over his leadership. Even Bahah has questioned Hadi's decree stipulating his dismissal, explaining that Hadi was violating the constitution, the GCC peace initiative and the UN Security Council Resolution 2216.

Hadi's recent tactics embody his dubious leadership. In a tribal country such as Yemen, where a leader's power is extremely locally-based through a leverage-building process, Hadi is drifting dramatically from strengthening his domestic ties, towards focusing solely on building his links with the West, which is itself, slowly starting to express discontent over his leadership.

When Hadi took office in February 2012, Yemen was characterised as a country on the verge of collapse. It is of course unfair to expect , that he would have already resolved these problems. But Hadi has taken one negative step after another, serving only to exacerbate Yemen's already mounting issues. Any successor to Hadi will need to rethink the setbacks he has come up against, prioritising a discourse addressing the population inside Yemen and building trust domestically before internationally.