Yemenis for Peace Need Your Support 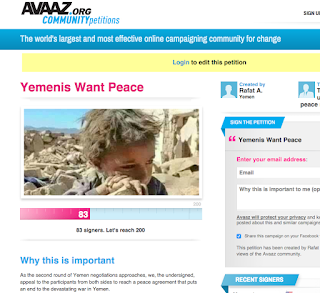 *Yemen is in a desperate need for peace and your support is needed. "Yemeni men, women, and children are living through the worst and most violent period of their recent history," reads a recent petition created by 23 Yemeni intellectuals in support of the soon-to-begin second round of peace talks in Geneva part of UN mediation efforts accompanied by a truce. Yemenis understand that they must seize the chance and pressure warring parties to have an end to the ongoing tragedy of million of Yemenis, and they urgently need your solidarity.

The petition states as well, "during the past few months, more than 6 thousand Yemenis were killed and over 26 thousand injured, with the majority in both cases being civilians. Since March, more than 2 million Yemenis have been displaced from their homes; more than six million Yemenis have been left on the brink of famine. More than 20 million Yemenis--80% of the population--are in desperate need for water, food, fuel, medical supplies, education, and security. Every day, more and more fall victim to military operations, terrorist attacks, or crime caused by the absence of security."

Ten months since the Yemen war began and neither side has achieved a decisive military victory, only leaving the country in a downward spiral. Yemeni-British journalist, Nawal Al-maghafi sharply describes the conflict nature and says, 'the problem with the war in Yemen right now is that it has became a conflict of pride. Neither side is willing to step down because of a pride; and that's what makes it really dangerous. This why we need a third party and that's why I keep going on and on about the US, the UK and Europe, and their positive involvement in the resolution of this war. We need actors like that to really put pressure on both parties to follow through with the UN resolution 2216."

Having said that, the petition considers you as a key player that can make a difference in prevailing peace immediately in Yemen. The petition 'calls on people in Yemen, the region and the world at large to put more pressure on their representatives, officials, and governments to participate in serious actions to end the ongoing bloodshed in Yemen'.

The ongoing conflict has sparked a catastrophic humanitarian crisis and the country is at risk of slipping into famine, according to a recent UN report. The coming peace talks could be a real opportunity to have an end to this disastrous conflict. All efforts must be exerted to stop the approaching man-made famine in Yemen. You may sign the petition here.