Postcard From Alexandria: Glory to Mahinour 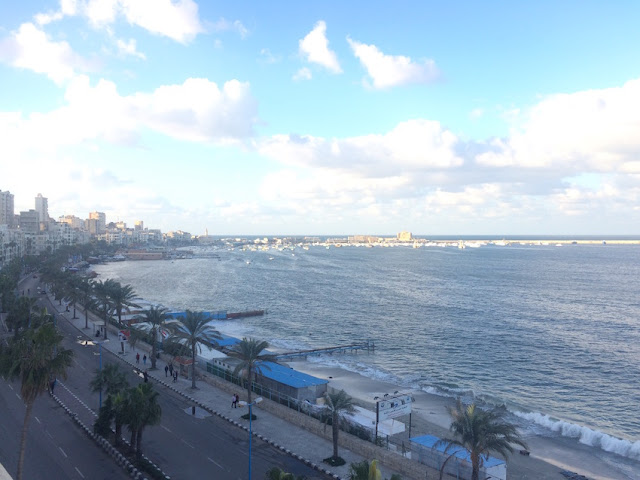 *I hesitated very much before writing this piece for what I would write might deprive me from entering Egypt ever again. Egypt is today ranked as the second world's worst jailer of journalists after China. Over the past two years, Egyptian government has been extremely aggressive towards its critics; and I thought better be silent and non-aggressed. Nonetheless, it agonizes me to not write and pay respect to my revolutionary friend who risked her life for others' rights to be respected. She, who defended many people's rights including my own people's right to peace, is today behind bars for saying No against oppression and injustices, and I mean here Egyptian political activist, Mahienour el-Massry.

I was in Egypt earlier this month for, the once popular and gradually fading, pan-Arabism reasons. It's been almost five years since I left Yemen and had not gotten the chance to visit again. The war erupted in March this year and I had to endure my life's greatest disappointment of not being able to see Yemen as soon as I thought. Thus, Egypt was my choice of destination to recharge my Arabism heritage away from freezing and calm Sweden. I went to Alexandria, and on my way in the plane I couldn't help but think of that I was traveling to the hometown of Mahienour el-Massry. Watching 'Mandela' the movie in the plane did not also give me a break from thinking of Mahi, for she's also our freedom fighter.

Mahi (as we, her friends, like to call her).

Filmmaker, Islam Kamal's video-interview with Mahienour el-Massry a year ago.


This was my second visit to Egypt. My first trip was in November 2011, during theMohammed Mahmoud street crackdown. It was during the peak of the Egyptian revolution that I had the privilege to meet Mahi in person for the first time. My first impression was what a considerate lovely person she was, as I noticed how genuinely interested she was in knowing about Yemen's uprising through her sympathetic questions. I wanted to always keep in touch with this lovely person. 'Let me follow you on Twitter!' I said. She typed her name on my twitter search box. I found her. I was surprised to find that she was already following me. Now, this might sound trivial thing but when you understand that most of the Egyptian activism scene then was un-interested to follow the situation in Yemen, you would realize how considerate Mahi was comparatively to the other young Egyptian activists. Ever since, I'm humbled to call myself one of her friends. In the following year, I had the chance to have her company during her visit to Sweden.

Watching the movie 'Mandela' made me think of Mahi, the political tireless activist and lawyer, who's serving a 15-months prison term after being jailed, alongside several others, for participating in a protest outside El-Raml police station in 2013. Mandela served 27 years in jail for a cause he believed in. I could see some of Mahi in Mandela's character. This is the second time Mahi is put in jail. In both times, she was jailed for her peaceful political activism. She's been one of the fierce voices against police brutality, the military trials for civilians and Egypt's notorious protest law. Today, Mahi is a prisoner of conscience, detained solely for peacefully exercising her rights to freedom of expression and assembly, as well-described by Amnesty. I used to jokingly tweet her: don't get arrested soon until I come and visit you in Alex! She used to laugh and promise me: I will postpone all my imprisonment plans for you, Afrah.

The reason I had the urge to speak up is that, hopefully, my love can reach Mahi wherever she is. Mandela survived all these years of isolation because of the love he got from his wife, children and community, and the international community. I'm certain Mahi is getting lots of support worldwide because she frankly deserves all the love in the world.

This is a young lady who has put others' rights before her's. She did not only fight for her fellow citizens, she has even -as I was told by a journalist friend in Egypt- been sleeping at police stations along with refugees to make sure that they did not get assaulted or abused by police officers, following the rise of xenophobia in Egypt in 2013 against Syrian refugees who sought safety in the country and many of them were being threatened with deportation. Mahi started to act and co-founded an organization to show solidarity with refugees in Egypt. And when the war erupted in Yemen, Mahi started a petition demanding an end to the war in Yemen and Egypt withdrawal from the Saudi-led coalition.

Once my foot hit Egypt's soil, I tried to find a way and visit Mahi in her prison. My attempts failed for security is extremely tight on Mahi. I wanted to see her and thank her for all what she represents: the revolutionary spirit and defiance. Even though I think that for Mahi to spend this time in prison at her prime life is a tragedy, I'm certain she's undergoing an opportunity where her political consciousness is enhanced day by day. During her first time in prison, a leaked audio message from Mahi was a true testimony of this young lady's political awareness, in which she discussed other female prisoners' plight and the need to abolish Class Discrimination in the country.

I can see that Mahi will be free; sooner or later, and I'll definitely visit her in Alexandria.

And, until then, glory to Mahinour!