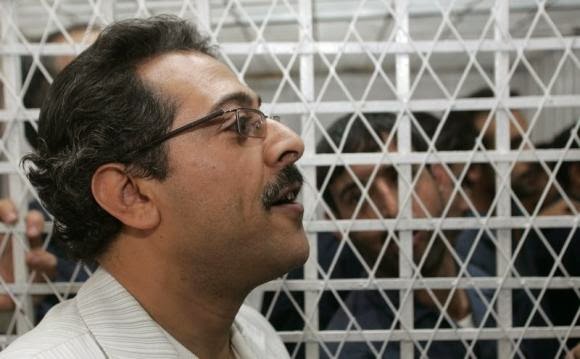 "Assailants on a motorbike on Wednesday shot dead one of Yemen's top journalists, Abdul Kareem al-Khaiwani, who is also an activist close to the country's dominant Houthi group.... "He was one of the godfathers of Yemen's tradition of saying no to those in authority," said his friend, Yemeni writer Farea al-Muslimi."

"A supporter of the Houthi rebels, Al-Khaiwani was a visceral critic of the former Yemeni regime. Arrested in late 2004, he was convicted of insulting former President Ali Abdullah Saleh before receiving a presidential pardon.

Arrested again in June 2007, he was accused of links with the Shiite rebels in the north of the country and was placed in pre-trial detention on a charge of “disseminating and publishing information liable to undermine army moral.”

Released on health grounds after a month, he continued to work with independent and opposition media outlets. After writing an article about prison conditions, he was briefly abducted and beaten in August 2007 by gunmen widely suspected of being members of the state security services.

Al-Khaiwani is the second journalist to be murdered in Yemen since the start of 2015. Khaled Al-Washaly, a reporter for the Houthi TV station Al-Masira in Dhamar province, was killed on 4 January 2015."


An eyewitness recalls the unfortunate assassination incident, in Arabic:


"Al Khaiwani was named earlier this month as a nominee for international journalist of the year in the British Press Awards, which are due to be announced on March 31."