'At least 35 people have been killed and 68 others injured by a bomb blast outside a police academy in Yemen's capital, Sanaa, early in the morning.'

Two men were seen getting out of a minibus and walking away shortly before it exploded beside dozens of people queuing to enrol at the academy.

Car bombs seem to be an effective killing tool in Yemen, and similar terrorist attack at the police academy has occurred before, in July 2012. It's all Déjà vu. What distinguishes today's event though is that the security forces managed to prevent another catastrophic attack to happen. Security consultant, Hisham in Sana'a tweets: 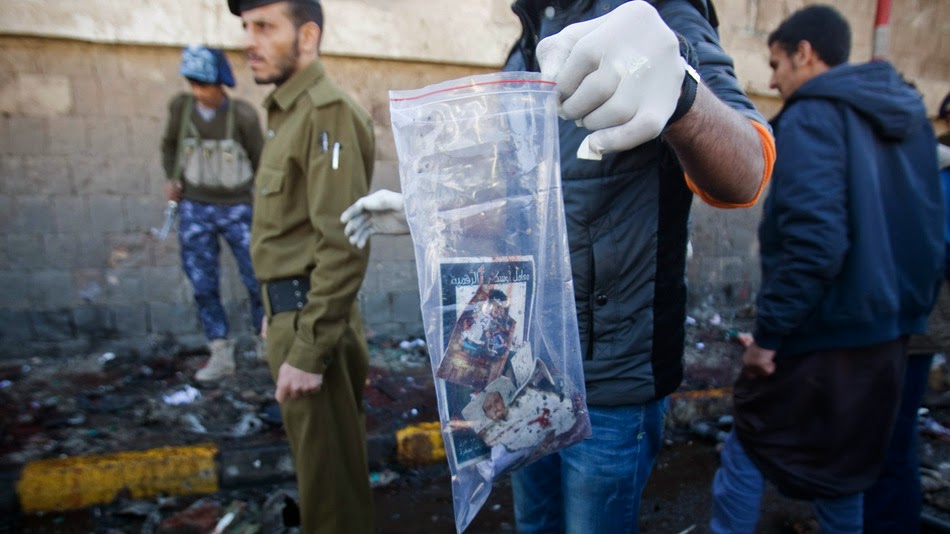 The deteriorating security situation in Sana'a takes its toll on its citizens. Tragic. Faizah in Sana'a tweets:

"My friend's neighbor received her 16-years old son back in pieces. He went to draw his dream to have a job and so he returned in a coffin."

Photojournalist, Mohamed Al-Emad in Sana'a writes in his Facebook, "15 people, some of the best young people I knew, they have just left us among the victims of the attack at the police academy. Some of them worked in the Interior Ministry, and the Public Facilities Management. They attended today as they were invited by the Interior Minister to deal with their cases. What a dirty plot!"

A coincidence or not, Paris witnessed a tragic attack today; at least 12 people were killed. Today was an opportunity to think again of violence committed in the east and the west, and how reactions typically divide. Yemeni-Brit journalist, Abubakr Al-Shami tweets:

Worth remembering that on the day of the Paris Charlie Hebdo attack 40+ killed in Yemen bomb. Muslims bear the brunt of these attacks.
— Abubakr Al-Shamahi (@abubakrabdullah) January 7, 2015