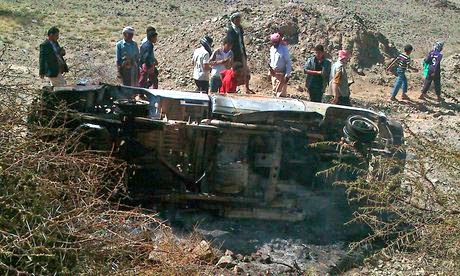 "The killing of about 55 people in southern Yemen has highlighted an ongoing US-backed campaign against al-Qaida's most active frontline. Reports from Sana'a and Washington confirmed the deaths in air raids and drone strikes against targets in Shabwa and Abyan provinces, a stronghold of al-Qaida in the Arabian Peninsula (Aqap). Apparent retaliation followed swiftly, with four Yemeni security officers gunned down in the last 24 hours. The aerial attacks – described by one experienced observer as "massive and unprecedented" – started on Saturday and ended late on Monday.....The government acknowledged that three civilians were killed in Saturday's strike in al-Bayda province – the scene of a controversial attack last December in which security officials said 15 people on their way to a wedding were killed." -The Guardian