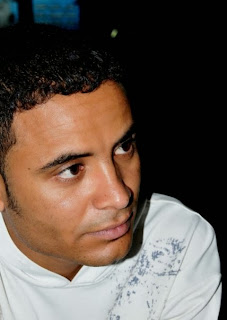 Hani Al-Junid, prominent political activist and reporter for Al-Sharae independent local Yemeni newspaper received a death-threat message into his Facebook inbox, by an unknown person yesterday; threatening that Hani's termination is soon. Hani is well-known for his political activism in campaigning against the Gen. Ali Mohsen al-Ahmar, commander of the army's 1st Armoured Division's militarization of Sana'a University and co-organizing the Al-Arateet rally and most importantly he's known for his sarcastic, secular, socialist-tented writings.

The threatening message (shown below) says, “your end is soon. You won't miss it. We swear to God that we will make you sit at home paralyzed and you would be not able to move an arm or a lag. Period. One bullet in your spine and you would be over.” 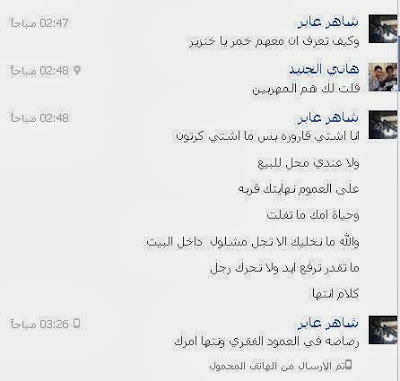 Once Hani received the message, he made a snapshot and posted it on his Facebook wall. Hani wrote, “this person is not my friend and I don't know him at all. He started messaging me that he was cold and wanted wine. I told him that he should contact Ali Mohsen and Abdelwahab Tawaf, as they are the only smugglers of wines. After awhile, he stated that my end is soon.”

Hani has always expressed that such tactics to silence him never scare him, he pointed on, “honestly, I receive threats every once in awhile but I never care about them. However, this time I sense that it's serious. And I'd like to tell this bastard that his threat won't scare me and I'm ready to sacrifice myself.”

While Yemen after the 2011 uprising enjoys greater freedom of expression, the newfound freedom had been tempered by the rise of such incidences of threats and violence against the media. This incident for Al-Junid is one of a spate of attacks and other threats media groups receive. Al Junid has been physically assaulted by a group of unknown men after he left a demonstration at Sana'a University against its militarization, in October 2012.