It's been one year since the coalition of the Gulf state monarchies (The GCC) came together and suppressed Yemen's Uprising that was to some extent a legitimate popular revolution until internal political forces (Ali Mushen al-Ahmar, Hameed al-Ahmar and the JMP) jumped in. 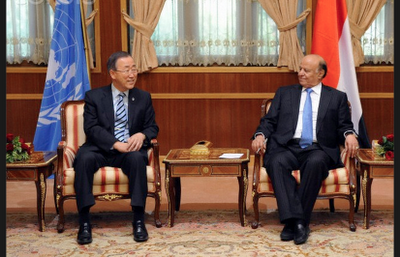 Ki-moon visit could be interpreted in many ways. "Aside from being a show of support for President Hadi, his visit did not otherwise benefit the stalled transition process in Yemen," says Haykel Bafana'a, Yemeni lawyer based in Hadramout city.

Journalist Mohammed al-Qadhi, based in Sana'a writes on his facebook page, "Ki-moon visit is a strong message of support to president Hadi and the current goverment. It's also a clear message to those war dealers that the transitional process, as Ki-moon stated, is irreversible. Therefore, Hadi can't offord another excuses and must make strong decisions that resonate to Yemenis' aspirations for real change and building a real democratic civil state."


Not only Ki-moon graced Yemen with his visit, the Gulf Cooperation Council (GCC) head, Abdul Latif al-Zayani (to the right) and the special adviser to UN Secretary-General and UN Envoy to Yemen, Jamal Ben Omar (behind Hadi) were in the celebration meeting too. 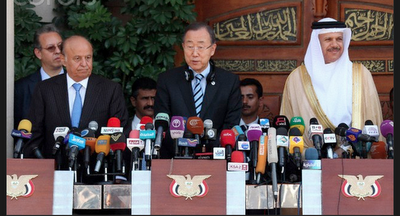 As you can see in the picture, both Hadi and Ki-moon had a press conference. Hadi was emphasizing all the points the GCC deal attempts to implement and Ki-moon has stated that he "welcomed progress in Yemen's democratic transition and that the process must be ‘irreversible'." Here is a segment of Hadi's talk:-

Even though it was a big event in Yemen and for the history of the 2011 Uprising, not all media outlets covered the event. Al-Yemen Today Tv channel, (owned by Saleh) has chosen to completely ignore the event. Why? because someone is feeling really ... "bitter."

Seemingly, this anniversary represents a reminder of the defeat Saleh is swallowing gradually. I bet this must be eating him: Hadi delivering a long speech on this occasion in front of a person that embodies the International Community, Ki-moon:-

Nonetheless, the question remains, what has been achieved since the GCC deal was signed (other than that Saleh was removed)? Oh my! what shall I say.. political divisions have been enhanced, the army has not been united, Saleh is still in the country enjoying the full impunity, economical hardships increasing, ... that's just a partial list. 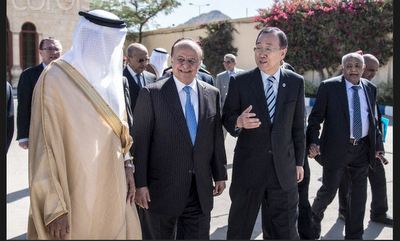