What did I do in the political week - Almedalen

I had the chance to be speaking in a seminar at the Almedalen week in Visby, a seminar on “Women After the Arab Spring” organized by Operation 1325. I spoke along with Cecilia Uddén and Bitte Hammargren, two of Sweden’s most bright Middle East correspondent journalists and Prof. Ingmar Karlsson, from Lun University.

To begin with, I don’t like the term “the Arab Spring” anymore. I honestly think what we are witnessing is not a seasonal event, but it’s a political movement for all those struggling Arab countries who are fighting for over one year and half for democracy and social justice. The seminar attracted lots of crowd who were thirsty to know about the speakers’ reflection on the recent developments and how it could affect Arab women.

When it was my turn to deliver a speech, I basically focused on the following points:-

*Arab women at the moment might not have an organized big union or coalition but at least the influence we have from each other is immense. Personally, that what fuels me with energy all the time. I remember when I first watched a report on TV about the Tunisian blogger, Leena Ben Mhenni and I secretly told myself, “I want to be like her.” She had a great influence on me.

*If I’d categorize women’s political participation in Yemen, I’d say; they are divided into three sections:-

1-Women who have zero knowledge of their rights or duties, simply because they live in rural areas with so little services by the state like schools, facilities, water, electricity, proper roads, health services, etc. In addition, those females suffer from a high percentage of illiteracy. Around %67 of women in Yemen are illiterate. How could we expect them to be politically involved?!

3-The elite politically engaged women - I’m afraid I’m one of them - who are away from the first category basic concerns. I believe the three female ministers that we have in Yemen now are also in this category since we have not seen/heard anything concrete coming from them for women’s sake. Human Rights minister, Mrs. Huria Mashhoor has visibly been trying to advocate openly on some of women’s rights that are stuck in the lousy judiciary system that we have in Yemen.

On top of all that, I stressed on the fact that there is an acute situation that we face in Yemen at the moment that is hunger. Around 1/3rd of children in Yemen, suffer from malnutrition and around 10 million people out of the 24 million Yemen’s population - that’s %44 of people in Yemen -are threatened to starve to death because of hunger. It’s not that there is no food, but it’s that people can’t afford buying it. The humanitarian crisis has to be the top priority presently.

Then, I urged Nobel Peace Prize winner, Tawakkol Karaman to use her power and influence to initiate a rescue plan for the humanitarian crisis in Yemen. In fact, I sent her a message after the seminar ended about that. I’m still waiting for her respond. I really urge Tawakkol to do something. I believe she can do it; better than all those government officials inside Yemen.

Then, on my way back to Stockholm, I had the chance to talk to a high ranked officer at Oxfam who was visiting Almedalen too and she warned me of a catastrophic humanitarian crisis in Yemen. According to Oxfam estimation Yemen is at 2nd rank close to the top to reach famine. It's extremely important to avoid Yemen become at the 1st rank. She told me, “Yes, Yemen needs long term projects to boost its economy but the food crisis is extremely urgent! People are starving to death.” I kept telling the Oxfam officer that we need a long term projects in Yemen, but she insisted that famine will sweep away the people. “We must act immediately and feed them. In parallel, we still can focus on the long-term projects,” she told me.

I leave it here with some pictures from the beautiful Visby and the seminar... 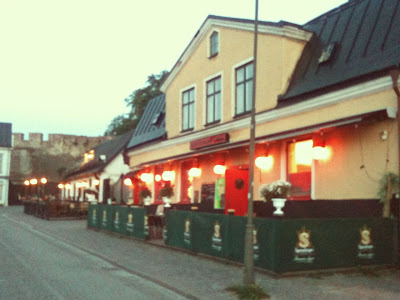 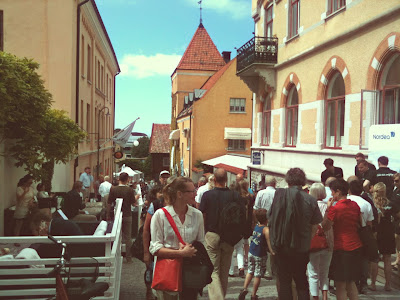 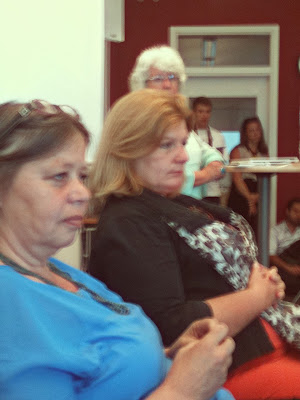 To the right, Cecilia Uddén and to the left, Bitte Hammargren. 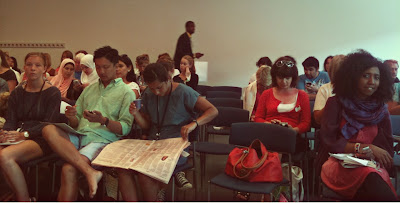 The lovely crowd - My Yemeni sister, Hana al-Khamri appears to the right :) 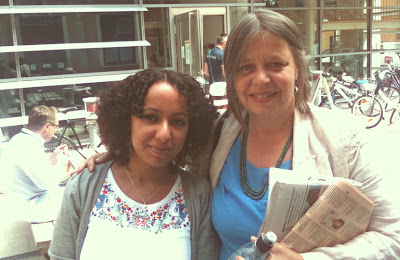