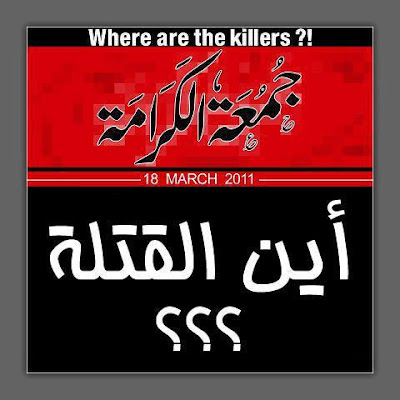 Today one year ago, I was fearfully running from one room to another at my home in Sana'a. I jumped to one window to another; trying to see anything and I did see the smoke. My house was located right next to where the massacre took place. My ears heard nothing but the non-stop gun shots. My pale face was covered with tears.. I was crying like a baby. During all that horror, I kept checking the news on TV and I rushed to my laptop every minute. I was tweeting of what was happening.

My mother was calling everyone to make sure that they were alright. For me, I was in so much pain because it really didn't make a difference if I call. I knew that everyone was not alright. I was visualizing where all the gun shots I heard was going to? to how many chests and heads.. I was realizing that many lives would end by those gun shots. Till today, I still can hear the gun shots and remember the feeling of horror. It's like it just happened yesterday.

I watched the news and saw the dead bodies; it was 20 people were dead, then, 30, then 40 and the number rised till 52. It broke my heart! I can't even write now how did it feel. While my tears dropped heavily, my mother screamed in horro that Amar (my cousin) was there!! We kept calling him but he never picked up. Amar was a diligent protester. He was only 17 but had a great pride of the change he wanted to make. That's why he used to protest 24/7 till Saleh would fall down. I loved Amar and I couldn't imagine that we could lose him just because he was among the thousands people protesting non-violently and peacefully. I called him but his mobile was switched off.

It was one day but felt like ages. Time was passing slowly and the killing took a long time. The one hour felt like years. I wanted to go out and see/help or do whatever; but it was too dangerous; snipers where everywhere and gun shots flying randomly.


The very spot where the protesters fell shot by the snipers is where I spent my childhood , is where I walked by during my first years in school. I know the its details by my heart. I broke my heart to imagine that it'd be transformed to a bloodshed scene and that it was full of blood of my own people.

The dead bodies were rushed to the near mosque where it later became the field hospital. The bodies laid down while volunteer doctors and nurses tried to rescue them. Here is a clip when one nurse couldn't tolerate the shock and the pain to see all the dead youth:


After a non-stop crying for a one day; you'd feel your whole body dry, a headache, and a little sense of paralyzation. When it was finally the evening, Amar picked up his phone and told us he was alright!

I couldn't sleep that night. The pain was too much. I was thinking of how many families tonight would realize that their loved ones were lost forever. 52 families spent their night knowing that one of their sons/brothers/husbands got killed with cold blood by snipers.

Next day, I went to the street with a sorrow in my heart trying to figure out; was it for real? I hoped I was hallucinating but no. Sana'a looked differently ever since. People looked so sad. The silence was covering all the streets. The massacare scene was sieged. I couldn't enter. Instead, I went to see Amar. I met him in the afternoon. I hugged him and thanked Allah that he saved him for us. Then, Amar told me his version of the story of what happened. But today, so many things have changed and it's clear what's the truth. Saleh's forces were responsible of the killing. My main prof is that this massacare took place over and over in Aden, Taiz, Hodaidah, Mukala and so on ,, but little media coverage was given to them. Sana'a was lucky to have a better media coverage. So, what happens in Sana'a makes a louder noise than the other provinces.

That Friday was called (Friday of Integrity) and all its victimes were killed because they protested against injustice and yet they were killed in a savage and inhuman way. The 18th of March will always be remembered as the day when young protesters were bravely and peacefully taking the bluets for the sake of their country. I urge that this day become an annual day of mourning to pay respect to all the martyrs. I also urge that schools in Yemen teach its students about this memorable day in Yemen's history.

Nevertheless, recently, Yahya Saleh, nephew of former president Ali Abdullah Saleh and the head of the Central Security Forces made a TV appearance where he was interviewed by the state TV channel. He dismissed any responsibility or involvement from the security forces about the Friday of Integrity Massacre.

Here is "Karama Has No Walls" a documentary film about that tragic day Yemen experienced that day: